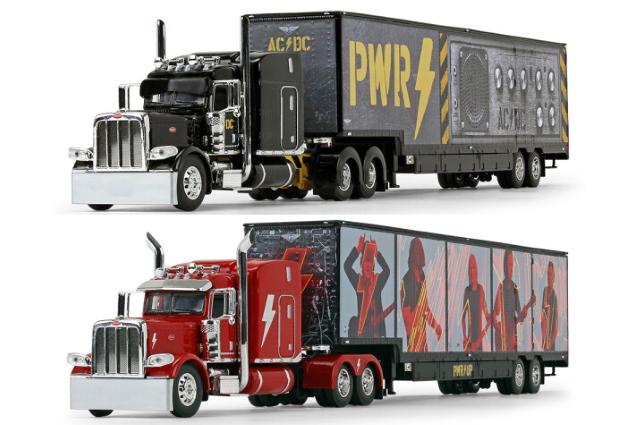 First Gear has teamed up with AC/DC to offer a rockin' new limited-edition replica featuring the band's seventeenth studio album, "Power Up". The 1/64 Peterbilt Model 389 truck is covered in a black finish with AC/DC bolts adorning the rear of cab, cab doors, and fifth wheel plate. The Kentucky moving trailer is matte black and features art and photography from the album. Each limited-edition model will come packed in a custom AC/DC PWR/UP designed carton.

This authentic Peterbilt Model 389 63" Mid-Roof Sleeper Cab diecast metal replica model comes paired with a Kentucky Moving Trailer and features an opening hood with authentic engine detail, poseable front wheels, accurately detailed cab interior, pivoting fifth-wheel for trailer attachment, functioning trailer landing gear/jack stands, and detailed chassis and undercarriage. This quality replica is decorated with a black paint scheme. You can see the band's iconic logo and thunderbolt throughout the truck. It also features art and photography from the album on both sides of the trailer. This replica will come in custom AC/DC packaging.

"Power Up" was released in November 2020. The LP features AC/DC's current lineup of Brian Johnson (vocals), Phil Rudd (drums), Cliff Williams (bass), Angus Young (guitar) and Stevie Young (guitar). It was recorded over a six-week period in August and September 2018 at Warehouse Studios in Vancouver with producer Brendan O'Brien, who also worked 2008's "Black Ice" and 2014's "Rock Or Bust".