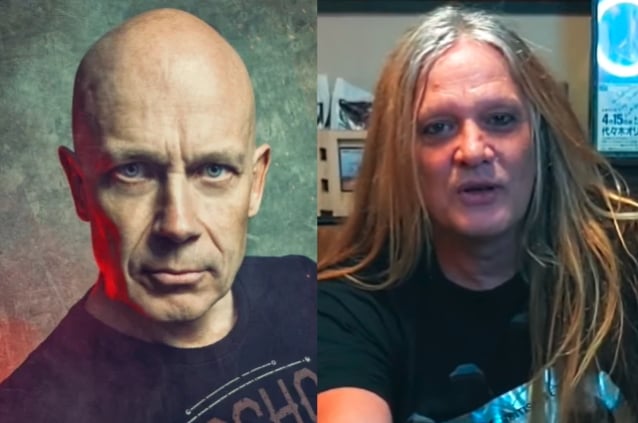 In a new interview with the "Talking With Mark Strigl" podcast, ACCEPT guitarist Wolf Hoffmann was asked if he had any memories of working with former SKID ROW singer Sebastian Bach on the song "Rock 'N' Roll" for Bach's debut solo album, 1999's "Bring 'Em Bach Alive!" He responded (hear audio below): "Yup, I do have some memories. He's a crazy motherfucker. [Laughs] No, I mean, he's a fun guy, but at the same time, he's high maintenance. He's really a very intense guy to be around, and it wears you out after a day or two. But I always liked his enthusiasm. I'm not sure I could take it 24 hours a day; it wears you out a little bit. But we had a good time. The thing only lasted only like a day and a half, or whatever, to record one track. But he's intense. He was all, 'Hey, man…' and he yells at you the whole time. I'm not used to that. My mentality and his maybe don't necessarily match very well. But it was fun."

Back in November 2005, Hoffmann agreed to join Bach's solo band for a one-time-only appearance at the Mid-Hudson Civic Center in Poughkeepsie, New York. Hoffmann accepted the offer to play the show during Sebastian's live appearance on Eddie Trunk's "Friday Night Rocks" radio program on New York's Q104.3 FM. Bach's then-regular guitarist, "Metal" Mike Chlasciak, was unable to make the Poughkeepsie performance, and being that Sebastian was in a pinch to find a guitar player fill-in, he brainstormed with Trunk live on the air over who could possibly be available to take over on guitar on such short notice. The always-resourceful Trunk drummed up and produced Hoffmann's phone number and they spoke live on the air. Wolf was at home in Tennessee practicing his guitar when his phone rang and played some classic ACCEPT riffs live on-air while Bach sang Udo Dirkschneider's vocal parts. In addition to Bach, the Mid-Hudson Civic Center show featured performances by TWISTED SISTER, YNGWIE MALMSTEEN and GEORGE LYNCH.

The following month, Hoffmann told Full In Bloom Music that it was "cool" and "fun to play with somebody else, because I had never really done that. It was weird because I have never played with anybody else in all my life. I joined ACCEPT when I was a little kid and ACCEPT has always been my only band."

Asked what it was like working with Sebastian, Wolf said: "Different, but a lot of fun." He elaborated: "I mean, everybody goes about things differently, the way they plan a show, the way they do a set, how they put songs together and all that. I used to different things and they just do it in their own way and I was happy to learn how they do it and jumped on that train."

He added: "Sebastian is a great singer, has a great voice and is a frontman all the way. Plus, it was fun to look at a singer at eye level."

ACCEPT's new studio album, "Too Mean To Die", will be released on January 15, 2021 via Nuclear Blast. The LP will be the group's first without bassist Peter Baltes, who exited ACCEPT in November 2018. He has since been replaced by Martin Motnik. ACCEPT's lineup has also been expanded with the addition of a third guitarist, Philip Shouse, who originally filled in for Uwe Lulis during last year's "Symphonic Terror" tour, before being asked to join the band permanently.