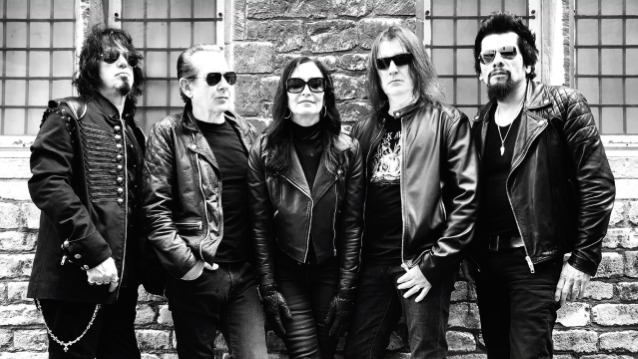 ALCATRAZZ's new studio album is nearly complete and will be released mid-2020. The disc was mixed by Andy Haller.

Bonnet says: "This album is for fans of the first two ALCATRAZZ records, in particular the one with Yngwie [Malmsteen]. We are not messing around here. This is going to be heavy and guitar-driven — plenty of that neo-classical guitar style, along with heavy riffs and over-the-top vocals … We are ready to take ALCATRAZZ up to the next level with this, our first studio album since 1986."

ALCATRAZZ's upcoming LP will also feature contributions from Chris Impellitteri, Steve Vai, Bob Kulick, Dario Mollo and Japan shredder Nozomu Wakai in what is being described in a press release as "a 'Bonnet-Shred-Fest' of some of the guitarists from his past."

Bonnet, Waldo and Shea previously reunited after 33 years for a unique series of shows in Osaka, Nagoya, and Tokyo, Japan in March 2017. For the special occasion, the band was rounded out by Mark Benquechea (drums) and Conrado Pesinato (guitars), both from the GRAHAM BONNET BAND.

ALCATRAZZ was formed in 1983 by former RAINBOW and MICHAEL SCHENKER GROUP vocalist Graham Bonnet along with Waldo and Shea and they would go on to make three studio albums in the 1980s. The band's debut album included a young Swedish guitarist, Yngwie Malmsteen, and their second album featured guitar virtuoso Steve Vai. ALCATRAZZ split up in 1987 after the release of their third album, "Dangerous Games".