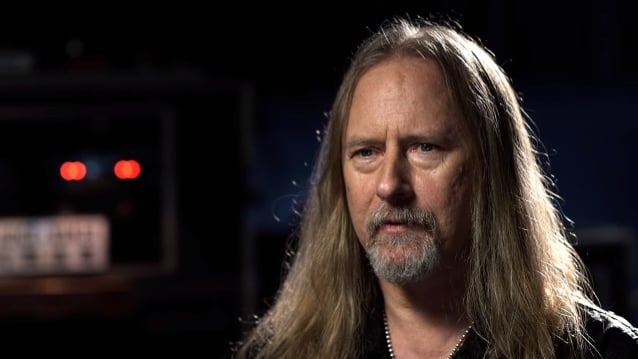 Jerry Cantrell, guitarist, vocalist, and songwriter of ALICE IN CHAINS, has completed work on his new solo album. The upcoming effort will mark his first full-length release since "Degradation Trip", the epic solo album he made in 2002 with future METALLICA bassist Robert Trujillo and FAITH NO MORE drummer Mike Bordin.

Cantrell announced the new LP's completion in an Instagram post Thursday night (March 4). In addition to sharing a photo from the studio, where he was joined by ex-THE DILLINGER ESCAPE PLAN singer Greg Puciato, among others, he wrote: "Finished my record tonight one year to the day from when we started recording it . What a crazy journey ... always is. Look forward to setting it free upon your ear holes sometime soon."

Cantrell's career outside of ALICE IN CHAINS has consisted of two solo albums and contributions to major film soundtracks. Jerry's first solo album, "Boggy Depot", was released in 1998, followed by his second album, the aforementioned "Degradation Trip". In addition to his solo artist work, Cantrell has released music on soundtracks for several films, including "Spider-Man", "The Cable Guy", "John Wick 2", "Last Action Hero" and "The Punisher".

Cantrell discussed his plans to record and release new solo music during a pair of interviews he gave in January 2020. While chatting with Gibson about his new collaboration with the guitar maker, Cantrell touched upon his solo activity, saying: "I've been in this band, in ALICE IN CHAINS, since 1987, so 33 years. And that's always been my first love and my commitment, but I did have the opportunity to make a couple of solo records, and since we started the band back up, I really didn't have the opportunity to revisit that.

"[ALICE IN CHAINS] just finished touring in September [2019] off of 'Rainier Fog', and we generally take about a year off when we're done touring anyway — just give it a rest for a second and then get it reinvigorated and focus on what's new. So we're gonna take a year off, so I thought I'd maybe do some shows and I'm working on some music as well. And there's gonna be some exciting things. I don't wanna say just yet what's happening, but I can tell you that there's gonna be some cool shit happening this year."

In a separate interview with People TV on the red carpet of the MusiCares benefit honoring AEROSMITH, Cantrell said that he tries to stay away from listening to other artists while putting together new material. "I'm working on a new record myself, so, generally, when I'm in that sort of a mode, I pretty much don't listen to anything until I'm done, so nothing creeps in there," he explained.

Back in 2018, Cantrell told Billboard that he wasn't in good headspace when he made "Degradation Trip". "I was just really fucked up back then, to be honest with you, and you can totally hear it on that record," he said. "It was done right before I got sober, and it was also done right when I was dealing with the death of my band, and then the unhappy coincidence of Layne [Staley, ALICE IN CHAINS frontman] passing away right after I released that record. So it was not a good time in my life, and it totally comes across on that record."

Cantrell added: "It's a record I don't listen to a lot anymore because of all those things I mentioned," revealing that he got sober a year after it was recorded. He continued: "But it's a record that's important to me, and I'll see Robert and Mike every once in a while and they're like, 'We should do some fucking shows, man. Some 'Degradation Trip' shows.' [Laughs] I tell 'em we'll do it someday."