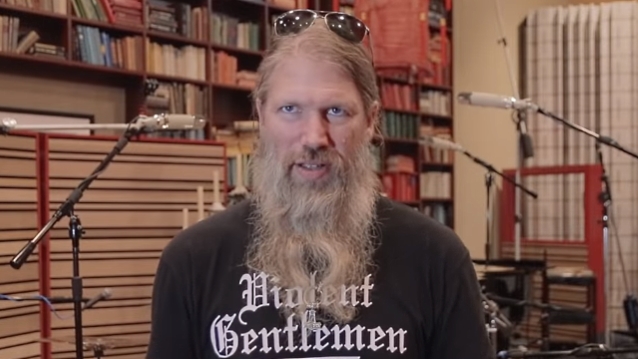 In a brand new interview with Australia's Wall Of Sound, AMON AMARTH frontman Johan Hegg was asked for his views on music-streaming services like Spotify and Apple Music. He responded: "Well, technically, I think, streaming could be a positive thing. I think one of the issues with streaming today is that the companies who offer it to people, unfortunately, are not paying the artists nearly enough — frankly. That's the way it is. But the problem is for an artist, there's literally no real alternative, because if you don't have streaming, people will download it illegally instead, and that's gonna hurt you even more. So, as an artist, you're kind of stuck in a situation where you're gonna have to deal with that. I think one of the dangers, if we aren't paying artists a fair amount of money, is that it's gonna be difficult for new artists to have the opportunity to do this full time. If you can't make enough money from doing it, how are you gonna be able to do it? People sometimes forget that, yes, it is a passion, it's art, but it's also a job, and artists need to pay their bills as well. So it's a difficult situation. But hopefully this will change and this will happen, but it's hard to tell."

AMON AMARTH's new album, "Berserker", will be released on May 3 via Metal Blade Records. The follow-up to 2016's "Jomsviking" was recorded at Sphere Studios in North Hollywood, California with producer Jay Ruston, who has previously worked with ANTHRAX, STEEL PANTHER, URIAH HEEP and STONE SOUR.

You can also catch AMON AMARTH supporting SLAYER on the next leg of the thrash metal legends' farewell tour, which kicks off May 2 in Phoenix, Arizona.