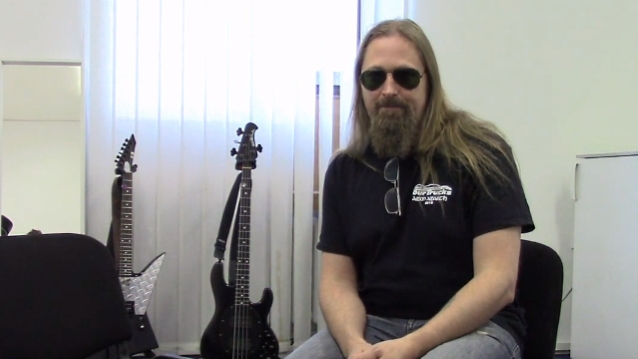 Prior to AMON AMARTH's June 11 performance in Bratislava, Slovakia, guitarist Johan Söderberg spoke with Rocker.sk. The full conversation can be seen below. A few excerpts follow (as transcribed by BLABBERMOUTH.NET).

On the group's latest album, "Berserker":

Johan: "The inspiration was, 'We're going to make the best songs we can.' That's usually always the goal for us. We always try to make the next album a little better than the previous one, but you're not always successful in that. That's something you see after some years [pass]. 'Twilight Of The Thunder God' is by many considered as one of our top albums, but when we released 'Surtur Rising' or 'Deceiver Of The Gods', we thought 'Deceiver Of The Gods' is better than 'Twilight' when it just came out, but maybe after some years and you listen back, maybe 'Twilight' is better. Now, we feel that 'Berserker' is on par with 'Twilight Of The Thunder God'... It's definitely the most successful album when it comes to chart positions and stuff like that."

On the band's consistency:

Johan: "All our songs are about Viking mythology, myths and stuff like that, except the last album was more like a concept album, which had a story about the guy through the whole album. That album didn't have so much mythology lyrics, but the albums before, they had much of that. I think this album is more like the previous albums, like 'Twilight Of The Thunder God'."

On the band's music videos:

Johan: "The videos are not exactly like the lyrics in the songs. They are supposed to be a little funny as well. They are not accurate to the stories in the songs. Some elements in there are connected to the songs."

On how closely his beliefs align with the band's music:

Johan: "I'm just a musician. I don't believe in pagan stuff, or stuff like that. For me, it's more like a cool subject to have [for] songs... I think it's interesting and cool, but I'm not in one of those groups. I'm only into music."

On the popularity of the Marvel character Thor:

Johan: "The way I see him is not like the Marvel comics. I guess it's a good thing that more people get their eyes open to that whole niche when they see a 'Thor' movie made in Hollywood. Maybe then they're checking on the internet, 'Oh, where's Thor from?' Then they find the real mythology, and then maybe they get interested in that."

On his favorite myths:

Johan: "Probably Thor. That's the coolest, I think. And I like the myth of the 'Twilight Of The Thunder God', when he grabs the snake from the sea."

On whether AMON AMARTH has considered collaborating with folk metal acts:

Johan: "Not really, because I'm more [into] traditional heavy metal. That's my kind of music — like, IRON MAIDEN, JUDAS PRIEST and ACCEPT. That's my inspiration. I think we are a metal band, and not a folk metal band. It's only the lyrics that have the mythology theme, but other than that, I see us as a metal band, and we should not mix in traditional instruments. That's not my kind of music... I can listen to classical music and electronic music, like film scores like 'Blade Runner' when I don't listen to metal, but mostly, it's IRON MAIDEN and AC/DC."

"Berserker" was released on May 3 via Metal Blade Records. The disc was recorded at Sphere Studios in North Hollywood, California with producer Jay Ruston, who has previously worked with ANTHRAX, STEEL PANTHER, URIAH HEEP and STONE SOUR.