ANTHRAX has joined up with Record Store Day to release a limited-edition, custom mini-turntable, as well as a vinyl disc bundle consisting of four three-inch singles (sold separately). For the vinyl discs, the band reached way back into its rich catalogue for four favorites: "Madhouse", "I Am The Law", "Got The Time" and "Discharge". Taking inspiration from the 3" turntable creation in Japan, drummer Charlie Benante, who oversees all of ANTHRAX's artwork, orchestrated creating the minis' cover art in the style of the seven-inch record covers he collected from IRON MAIDEN and KISS. One thousand of the turntables and 1000 of the vinyl bundles will be exclusively available via RSD.

But wait, there's more: one of the 1000 mini-turntables will include a Golden Ticket, the winner to be the recipient of a personal Zoom call from ANTHRAX's Joey Belladonna and Frank Bello.

"I'm really happy about being part of this," said Belladonna. "I love being able to reach out and connect with our fans, so being a 'first prize' in this contest and having the opportunity to have a real conversation with one of our fans is really terrific." Added Bello: "I love the idea of the golden ticket, it's a cool 'Willy Wonka' moment, and it'll be fun to just shoot the shit with one of our fans."

Record Store Day, a global celebration of the culture of the record store, will be broken up into two "Drops" this year, similar to the way it was done in 2020. The two "Drop" dates will be June 12, and the second July 17; the ANTHRAX custom turntables 17 and vinyl bundles will be available in conjunction with the second RDS "Drop", on July 17 and July 9 respectively.

ANTHRAX's latest album, 2016's "For All Kings", was called by some critics the band's strongest album to date. Its arrival followed a five-year period during which the group experienced a rebirth of sorts, beginning with ANTHRAX's inclusion on the "Big Four" tour, and continuing with the 2011 release of comeback LP "Worship Music".

Benante will release a new album, "Silver Linings", on May 14 via Megaforce Records. The 14-track effort features an all-star cast of "who's who" in the thrash, metal, and rock worlds, with all cuts culled from Benante's acclaimed "quarantine jam" video series. 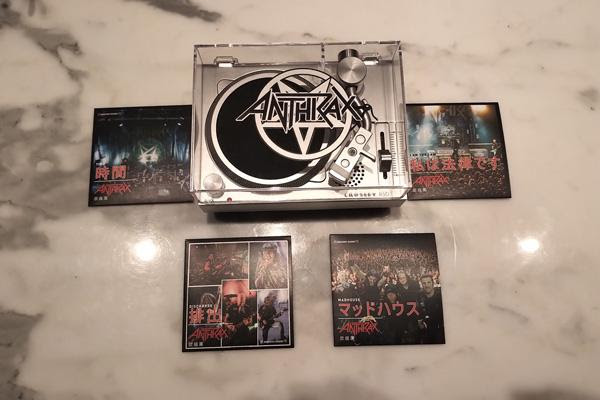