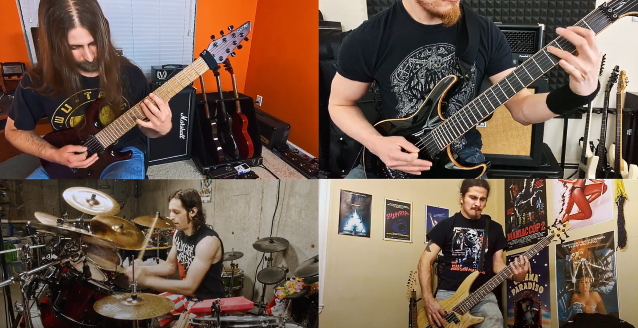 Florida's ATHEIST is widely regarded by those in the know as the pioneers of technical death metal, influencing many of today's top technical extreme metal bands. During quarantine, ATHEIST members Daniel Martinez, Chris Martin, Yoav Ruiz-Feingold and Anthony Medaglia kept their chops and produced a series of playthrough videos. The first of the series is for "Mother Man", off ATHEIST's second album, "Unquestionable Presence". Check it out below.

Vocalist Kelly Shaefer comments: "Hope everyone is getting through this very oddball year.

"Just before all of this madness happened, we were fortunate enough to do an amazing U.S. tour supporting CATTLE DECAPITATION.

"As some of you know, my fellow founding member Steve Flynn and I have worked with several different musicians since 2006 when we returned from a 17-year hiatus.

"Steve loves writing, and making records but many times cannot tour, and that has prevented us from being out there on your doorsteps as much as we might have liked to. So two years ago, we decided we would adopt a touring drummer with the Flynn seal of approval. In addition, we put together what I believe to be the strongest ATHEIST lineup since the original. Young fiery, badasses, who play this material in a frighteningly accurate way. Most can attest to this when they saw this lineup on the aforementioned tour in December 2019.

"Daniel, Chris, Yoav and Anthony have put together some playthroughs of two classic tracks from our second album. I am so proud of how it came out, we thought what a great way to introduce you to the new bandmembers.

"I am so excited to make music and tour with this humble, über-talented group of guys. I cannot say enough about them as people and musicians!

"So roll one up or pour yourself a self a shot and have a listen, and know that when we finally get back out on the road to see you all, these are the guys that will be behind me crushing your minds. I can't wait till we can play for you live, but in the meantime, I present ATHEIST 2020."

ATHEIST was formed in 1988 by Shaefer and Flynn. Followed by bands such as DEATH and CYNIC, they would define a sound that is a pillar of complex, progressive, jazz-infused death metal intensity, with supreme musical prowess — the genre celebrated and known today as "progressive technical death metal." ATHEIST attained that status thanks to its debut, "Piece Of Time" (1989), and the aforementioned "Unquestionable Presence" (1991), both regarded as important benchmarks of the genre.