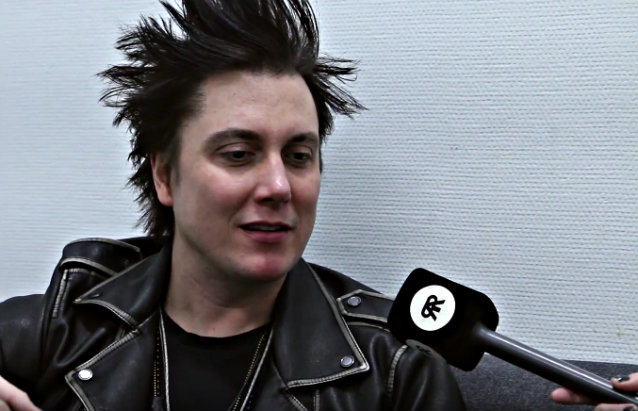 AVENGED SEVENFOLD's North American tour with METALLICA kicks off on May 10 in Baltimore, Maryland and will hit stadiums in 25 cities before winding down in mid-August. Additional support on METALLICA's first North American trek since 2009 will come from VOLBEAT, with GOJIRA taking over for the latter group for the last six shows.

Speaking to Finland's Radio Rock earlier this month, Gates said that he was "really excited" about playing with METALLICA again. "I think it's an absolute honor and a privilege and we're the luckiest band in the world to be taken in by such a legendary act," he said. "During our formative years, it was all about, 'What did METALLICA do?' and 'How do we do that?' and then you try and find an identity of your own, but they're still… They were the pioneers and the trailblazers. And they still do that stuff. We go and do a surprise release and then they do twelve videos for their record and have unbelievable success, and you're, like, 'Damn! That's pretty cool what they did, huh?' So we're always having those moments and it's really cool to see them continue to trailblaze and pioneer, and they're helping us and taking us along for the ride, and we couldn't appreciate it any more."

Asked if he still gets starstruck when hanging out with members of METALLICA, Gates said: "Yeah, definitely. I remember in Berlin when we played with METALLICA for the first time, and Lars [Ulrich, METALLICA drummer] came in. And you see how… He's as crazy and amped as you see on YouTube or whatever, but just the nicest guy. He comes in just full of fucking energy. That's Lars. Lars Ulrich is Lars Ulrich, on camera, off camera, and I had no clue how fucking sweet that guy is. He invited us to sing on stage, sing a RAMONES song that night, and it was just incredible. And that's just the type of guys that they all are — incredible human beings and people. And they inspire you to be better people. You wanna be better to your tour family, your home family… I mean, just because you're fucking rich and really successful doesn't mean that you need to be a dick. You can actually be nicer than everybody, which METALLICA has proven to do."

AVENGED SEVENFOLD played at Hartwall Areena in Helsinki, Finland on March 7 as part of its European headlining tour with support from DISTURBED and CHEVELLE.

AVENGED SEVENFOLD is touring in support of its seventh album, "The Stage", which was given a surprise release at the end of October with almost no promotion beforehand.