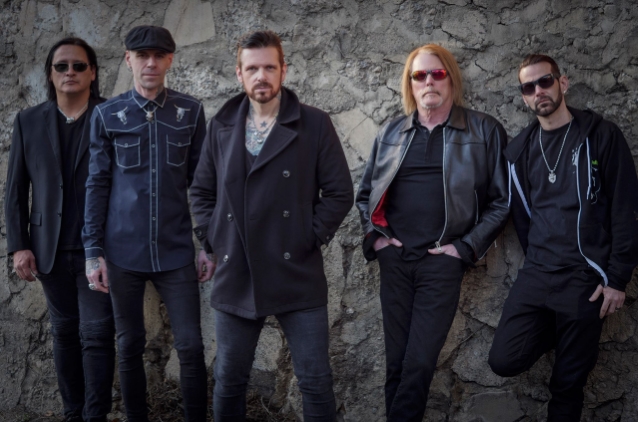 BLACK STAR RIDERS filmed a video earlier today (Friday, April 26) for the first single off their fourth studio album, "Another State Of Grace", in Manhattan Beach, California. Due in September via Nuclear Blast, the follow-up to 2017's "Heavy Fire" was produced and mixed by Jay Ruston (STONE SOUR, ANTHRAX, URIAH HEEP).

The band will support the record with a full U.K. and Ireland tour in October 2019, with additional dates in other territories to be announced in the near future.

Says Warwick: "I'm absolutely thrilled to be back with a brand new BLACK STAR RIDERS album. In my honest opinion, this is the best record the band has made. This is Christian and Chad's first album with the band and they have brought a fantastic energy and vibe."

Gorham adds: "It was great to be back in Los Angeles, and recording with Jay Ruston was an absolute pleasure. I am excited to see everyone's reactions to this amazing record… and I can't wait to get back on the road and play you these new songs."

Guitarist Damon Johnson announced his exit from BLACK STAR RIDERS in September, but continued performing with the band until the end of the group's U.K. tour on December 3.