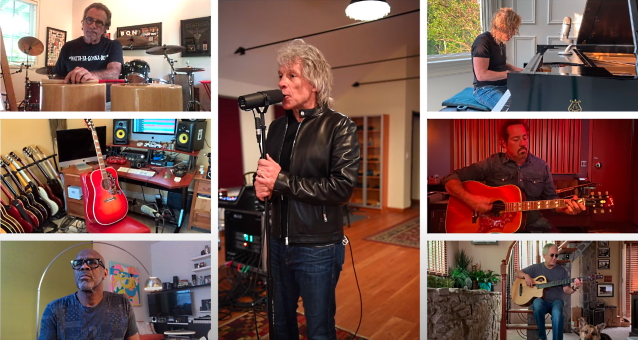 BON JOVI was among the artists that performed during the "Rise Up New York!" virtual telethon Monday (May 11) to raise awareness and funds to help New Yorkers whose lives have been dramatically impacted by COVID-19.

The one-hour benefit presented by the New York-based poverty fighting organization Robin Hood, and iHeartMedia, saw Jon Bon Jovi and his bandmates play "It's My Life" while in isolation.

Hosted by Tina Fey, "Rise Up New York!" brought together bighearted New Yorkers with one common goal: to raise funds for Robin Hood's relief and recovery efforts to help fellow New Yorkers rebuild their lives as the city moves towards recovery and beyond. One hundred percent of donations raised are deployed directly to the organizations on the frontlines who are providing support for food, shelter, cash assistance, health and mental health, legal services, education and more. To date, Robin Hood has raised over $115 million toward relief and recovery efforts since the onset of the pandemic in New York City. In addition to tonight's telethon, over $44 million of the funds were already raised through the Robin Hood Relief Fund and over $1.5 million has been raised through Robin Hood's "Relief Corps," including Gwyneth Paltrow, Karlie Kloss, Katie Couric and New York's sports teams, who launched GoFundMe fundraisers to engage their networks.

Robert De Niro opened the show with a call to action for the five boroughs to rise up, saying: "Our city is under attack but we've been here before. In the last 20 years - both 9/11 and Hurricane Sandy. You can take your best shot but you cannot break our spirit."

Host Tina Fey addressed the audience from an empty 30 Rockefeller Plaza to remind New Yorkers how even the smallest donation counts: "If you had breakfast today, you are better off than two million of your neighbors who woke up hungry."

Other musical performances included Mariah Carey's rendition of "Through The Rain/Make It Happen" and Sting's "Message In A Bottle".

CEO of Robin Hood, Wes Moore, stood in his former Bronx neighborhood to address the community's dire needs and share Robin Hood's 32-year-history of helping in the midst of catastrophic crises.

Longtime supporter of Robin Hood, entrepreneur, philanthropist and three-term New York City mayor Mike Bloomberg spoke to the needs of New York's most vulnerable and the financial hardships the city faced in the wake of crises like Hurricane Sandy and 9/11.

The benefit closed with governor Andrew Cuomo surprising viewers by introducing a special performance of "Miami 2017" by friend Billy Joel, which took over 13 of Times Square's iconic digital billboards. At the same time, the Empire State Building debuted a choreographed lighting spectacle that will repeat at 9 p.m. ET every night throughout this week.

"Rise Up New York!" was executive produced by Alex Coletti Productions and John Sykes, president of Entertainment Enterprises at iHeartMedia, along with talent producers Casey Patterson and Rick Krim.