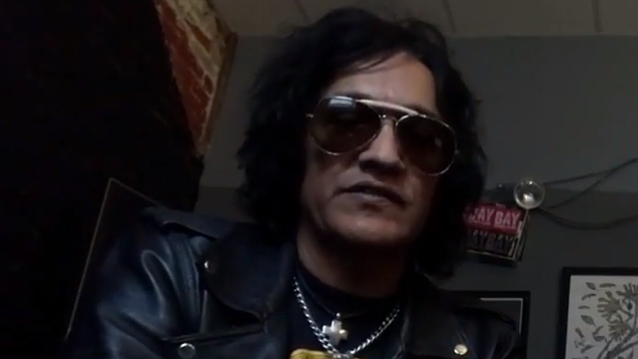 Prior to BULLETBOYS' performance in Philadelphia, Pennsylvania on October 12, vocalist/guitarist Marq Torien spoke with Sydney Taylor of MA Entertainment Global. The full conversation can be viewed below. A few excerpts follow (as transcribed by BLABBERMOUTH.NET).

On the group's latest album, "From Out Of The Skies":

Marq: "This record was kind of risky for us because we stepped out of the box a bit with the musical content of it. We were very, very blessed with different situations from these magical musicians that came to our rescue on this record, first one being Jesse Hughes from EAGLES OF DEATH METAL, [who] came in and sang on our first single. To actually facilitate this whole thing, we were invited to come into 606 [Studios] by [studio owner and FOO FIGHTERS frontman] Dave Grohl and cut our record there. It's been very, very magical for us — a very magical experience, and I'm just very, very thankful that there's so many people that have been coming to help us right now... People that have been coming to the party has been really amazing and magical for us."

On the importance of playing live:

Marq: "I really do think [success] comes down to the performance of our band. We definitely don't phone it in, ever. We play every show like it's going to be our last show. It's just something that we inherently have done for many years, so when people see us, they're like, 'Wow.' That's just the way we roll. We're all in great shape, and we try to play at the highest level that we possibly can."

On his upcoming plans:

Marq: "I really believe that I'm going to be working on something that's completely out of the box. The details will be coming soon, but I'm going to be doing something of a solo project that's going to be really different, and something that I've been looking forward to doing for many years. I've never really stepped out of the box to do it, so I'm going to be doing it when I get back [home]... To me, bands from our genre, if you're not putting out new music for your fans and family and friends, you're kind of, like, meandering in the shallow end. We like to jump in the deep end. We like to cliff dive."

Marq: "It's not really about the money for me — it's for the experience of trying to be like a musician from the old-school days, like James Brown or Chuck Berry, guys that were constantly working and constantly on the road, writing, going into studios whenever they can, coming up with a new ditty here and there. I kind of lean back to that. A lot of the artists from the '70s and how they used to roll. David Bowie is one of my favorite, if not favorite of all time. I always read and I'm constantly [thinking about] how these guys did this stuff, how they came up with the music, and it's basically from experiences and hanging with really amazing artists. David Bowie was hanging out with Iggy Pop and Mick Jagger, and these guys were all kind of in this world of doing music together. My genre doesn't really do that, so I stepped out of my genre to another tribe, and this tribe has been helping me, opening up my mind musically to different things and to not be afraid, don't have fear in trying to do something different. BULLETBOYS has always done something different on each of their records. I don't want to stay stagnant — I always want to release something that's palatable to the eyes and the ears, something fresh."

On the band's longevity:

Marq: "I feel very blessed. I never like to say, 'Oh, I feel really lucky.' I just feel really blessed. I have a lot of faith, and what we're going and what we're doing, it's just not stopping. Once you stop and take a deep breath and exhale, by that time, there's already about 20 bands that are coming out with something new. You just have to stay on top of the game and stay relevant, and most of all, you have to stay true and loving to your fans. That's where I'm at. I try to love on everybody every day. I love to hug people and make sure I let them know I really love them so hard, and that their coming out to see us, it means everything to us."

"From Out Of The Skies" was released in March via Frontiers Music Srl.