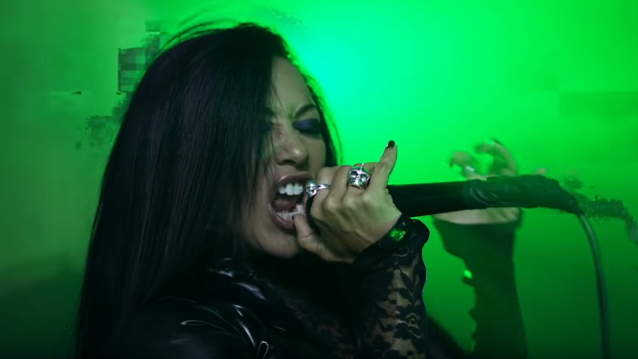 BUTCHER BABIES vocalist Carla Harvey, who took part in this year's "Dimebash" — an all-star jam tribute to "Dimebag" Darrell Abbott, the late co-founder and guitarist of PANTERA and DAMAGEPLAN — told The Orange County Register that a YouTube video of her band doing a PANTERA cover is what gave them their big break a decade ago.

"I've been a huge PANTERA fan since I was a kid and they were the one metal band that really made me want to be a metal performer," she said. "[Dimebag] was a huge inspiration to me. The first time I saw PANTERA, I was struck by the fact that there were so many different kinds of people at the shows. It wasn't just traditional metalheads, it was punk kids and frat boys, and being a kid back then, I was, like, That's not cool.' But now that I'm older, I can see that they were probably one of the first metal bands to make it more mainstream and to make it okay to like metal. That was huge, and the fans still love PANTERA so much."

BUTCHER BABIES spent the last few months working on its fourth album. The disc will be the follow-up to "Lilith", which was released in October 2017 via Century Media.

Last July, longtime BUTCHER BABIES bassist Jason Klein announced his departure from the band. He played two final shows with BUTCHER BABIES — on August 1 at Gathering Of The Juggalos in Springville, Indiana and on August 3 at Pain In The Grass in Auburn, Washington — before exiting the group to focus on being a full-time father to his preteen daughter.