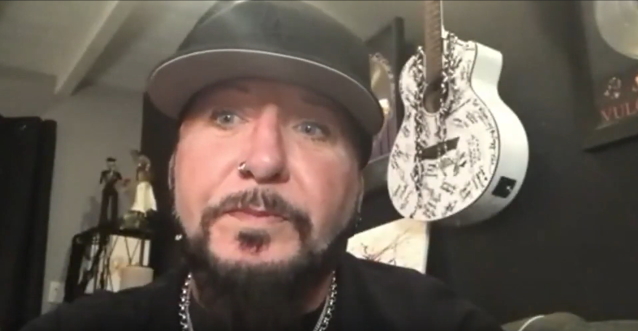 During a December 5-6 Headbangers Con live virtual panel, HELLYEAH frontman Chad Gray was asked if the band will keep going once the pandemic has subsided. He responded (see video below): "Everybody's just in a holding pattern right now. I don't have any new music. I've been telling Tom [Maxwell, HELLYEAH guitarist] to get me some riffs so I can write, because right now is a great time to fucking write. So we'll just have to see, man. Obviously, we need to get together and write some music. But, yeah, I mean, hopefully. It's all fucked up right now, nobody knows what's going on with anything."

Three months ago, Maxwell told the "The Ex-Man" podcast that he wasn't sure there would be a follow-up album to HELLYEAH's latest effort, "Welcome Home", which was completed after the passing of drummer Vinnie Paul Abbott.

"When he died — I'm not gonna lie — my passion, my love affair died as well with him," Tom said.

"I'm at a point right now where I've done some amazing shit with some amazing people and I've released a lot of great records. And I've found success in those — more elsewhere than others," he continued.

"Like I said, my love affair has kind of been cockblocked a little bit. I don't find a need or a necessity to continue without Vince."

"Welcome Home" was released in September 2019 via Eleven Seven Music. The disc marked HELLYEAH's final effort with Abbott (formerly of PANTERA), who passed away more than two years ago.

According to Maxwell, it was difficult for him to get up on stage as HELLYEAH without Vinnie manning the drums behind him.

"Vin passed, and we did two tours, and it didn't feel right, even though we had Roy, who's a brother," Tom admitted. "There's a lot of shows where I felt I was just phoning in my presence — I wasn't there."

He then reiterated: "I don't know if I even wanna do another HELLYEAH record. I just don't have the emotional need and drive.

"I feel personally, as Tom Maxwell — I'm not speaking for anybody else at all — but I don't know what I wanna do. I write songs all the time, and I write 'em for me, like I always did.

"I don't see myself doing another HELLYEAH record; I really don't."

Maxwell said that he doesn't rule out launching a fresh project as a way to get his music heard.

"I would love to get into something new, 'cause I have a lot of songs and I have a lot of music left in me that I'd probably wanna get out there, but I don't see it happening with what I have at my disposal right now," he said. "I need a breath of air, a new lung.

"For my own sanity, I need to write, I need to fucking play songs. But with who and for who, I don't know. It's gotta be the right thing. I need to feel like I'm with guys that are likeminded — not green motherfuckers.

"I'm not a kid," he added. "Doing music and being in a band and being in an explosive band is a young man's world. And for me to be productive, I need to be with other productive motherfuckers that have juice. I have juice, but do the other people with me have juice? And if they don't have juice, I'm totally cool with not having juice and being home.

"I'm not throwing in the towel — nothing like that — and I'm not saying that I'm fucking done with shit," he clarified. "But what I am saying is it's gonna take something… For me to fucking leave my house, it's gonna take guys, gals, aliens — I don't give a fuck — with a vision and something special about it.

"So, moving forward, if something new were to come along, it would have to be something that is real and honest and transparent and fucking badass."