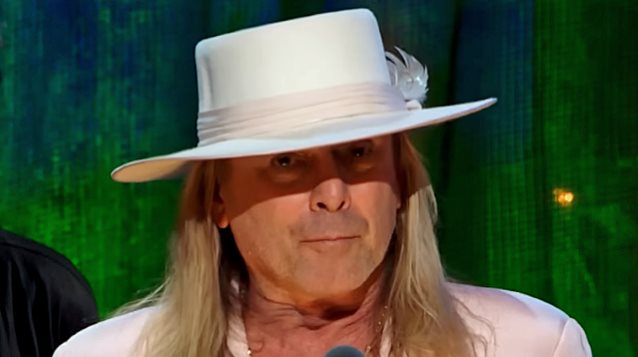 CHEAP TRICK singer Robin Zander, who recently expressed interest in filling in as AC/DC's frontman while Brian Johnson is battling hearing loss, was asked in a brand new interview with Radio.com if he is curious to hear what the legendary Australian hard rockers sound like with Axl Rose. Zander responded: "Uh, yeah, I'm curious, because I've known AC/DC for so long, but I wouldn't have done it if Brian was opposed to it. Brian's my neighbor, he's a friend of mine. But the thing is, I love the music, I love what they do, and if they were hard pressed, I would probably do it, but I would certainly pass it by him first, and if he was opposed to it, nah, I wouldn't do it."

Shortly before the GUNS N' ROSES frontman was announced as the temporary singer for AC/DC for their European and North American tour dates, Zander was enthusiastic about the prospect of stepping in for Johnson. He told Rolling Stone: "I'd love to do that. But I'd want the blessing of Brian. I wouldn't go there as a slap in the face to him. But if he said, 'Go ahead,' I would do it. And I'd donate the money to somebody. They're AC/DC. People want to hear those songs. Sure, they want to hear them with Brian. But if Brian isn't there, they can get someone else. I don't know what else to say, but I know I'd be heartbroken if something happened to me and I couldn't sing in CHEAP TRICK."

Rose made his live debut with AC/DC on Saturday night (May 7) in Lisbon, Portugal, and by all accounts delivered a triumphant vocal performance as fill-in for Johnson even if he was still confined to a chair onstage due to the broken foot he suffered during a GUNS show last month.

During an interview with BBC 6 Music, Rose stated about his future plans with AC/DC: "There's makeup dates in the States, and if I don't get thrown out before then, I'm looking forward to doing [them]. I think after that, it's about what they wanna do. I'm in if they want me in, and we'll sort it out, but right now that's getting ahead of ourselves with everything else that's on the table."