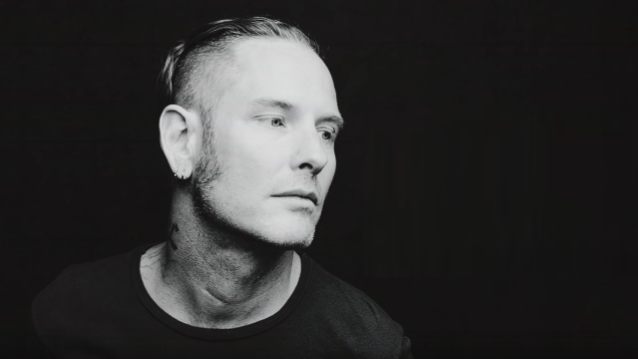 SLIPKNOT and STONE SOUR frontman Corey Taylor has released an acoustic version of his solo single "Samantha's Gone". The song is taken from his debut solo album, "CMFT", which came out in October. Corey recorded the effort with his band consisting of Jason Christopher on bass, Dustin Schoenhofer on drums, and Zach Throne and Christian Martucci (STONE SOUR) on guitar. The LP was completed at Kevin Churko's The Hideout Recording Studio in Las Vegas with producer Jay Ruston, who has previously worked with ANTHRAX, STEEL PANTHER and STONE SOUR, among others.

About the visual, Taylor told Bravo's "The Daily Dish": "The video for 'Samantha's Gone' served two purposes: making fun of so-called 'indie rock' bands and getting all my friends together to hang out and have a good time. We all went back and forth between having fun and social distancing. Watching the first 'band' was great, then being fired from our OWN song in favor of STEEL PANTHER was the icing on the cake."

Taylor recently made history as he reached No. 1 at Active Rock Radio with his powerful single "Black Eyes Blue". The achievement put Taylor in a class all his own, making him the first artist in the history of the format to reach No. 1 with three separate projects, following chart-topping efforts from SLIPKNOT and STONE SOUR.

"CMFT" made impressive debuts on charts around the world in October, entering at No. 1 on Billboard's Current Hard Rock Albums chart, while claiming No. 2 on Current Rock Albums, No. 6 on Vinyl Albums, and No. 9 on the Top Albums charts. Furthermore, "CMFT" landed Top 10 on the official album charts in Australia, Germany, Switzerland and Austria, with Top 20 debuts in the United Kingdom, Finland and Japan (international chart).

Featured in Rolling Stone's "Fall Album Preview 2020," "CMFT" has been garnering widespread critical applause, with Forbes affirming, "Corey Taylor's singing is undeniably the best it's ever been. From SLIPKNOT's last album to his new solo material, Taylor is easily among the best sounding rock singers alive." Kerrang! raved, "Corey Taylor certainly couldn't have predicted how important a sense of uninhibited joy would be on his debut solo effort, it's just what 2020 needs — and, even more importantly, exactly what he delivers." The Daily Beast attested, "'CMFT' finds the singer broadening his horizons and showing off his considerable versatility," while Stereogum noted, "Corey Taylor's lived several lives in the span that it takes most of us to push through just one, and it's clear that he cherishes every experience he's had so far." New York magazine added that "CMFT" "bridges his vast tastes and influences, dabbling in punk rock, metal, reflective acoustic tunes, plaintive piano ballads, and hip-hop, with Taylor's power-house vocals and introspective lyrics acting as a guide."

"CMFT" is highlighted by the singles "Culture Head", "HWY 666", "CMFT Must Be Stopped" (featuring Tech N9ne and Kid Bookie), and the Active Rock radio hit "Black Eyes Blue". Taylor also hit No. 1 on Billboard's Hard Rock Songwriters chart following the unprecedented debut of "Black Eyes Blue" and "CMFT Must Be Stopped", the latter of which has racked up more than four million YouTube views for its star-studded music video. Furthermore, Taylor debuted the pummeling "Culture Head" during WWE's NXT broadcast on the USA network, illuminating yet another facet of "CMFT" and showcasing the broad spectrum of this fiery and fearless rock 'n' roll opus, as Taylor touches on lifelong influences ranging from hard rock to classic rock, punk rock to hip-hop. 14-time world champion and EVP of global talent strategy and development at WWE, Triple H, also shared a WWE exclusive performance of Taylor and his band tearing through the MOTÖRHEAD classic "Ace Of Spades".

"CMFT" has been a long time coming for Taylor, with newly written tracks alongside some dating back to his teens.