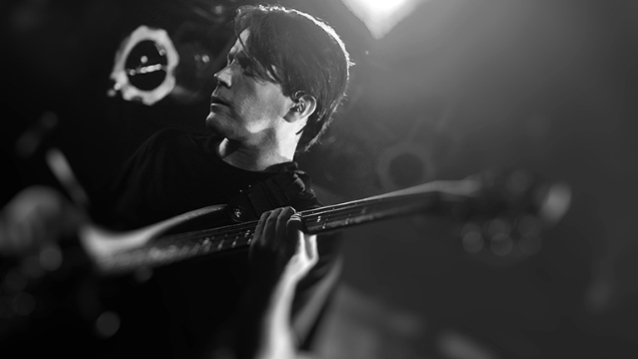 CYNIC's longtime bassist Sean Malone has passed away. He was 50 years old. No cause of death has yet been revealed.

The news of Malone's passing was broken by his CYNIC bandmate, guitarist/vocalist Paul Masvidal, who took to his social media earlier tonight (Wednesday, December 9) to write: "I learned today that Sean Malone has died. I am numb and grief stricken. He had a brilliant mind, a gracious heart and was one of the greatest musicians I've ever encountered.

"I know that this is a shocking loss for so many fans whose lives he touched with his artistry, as it is for me," Paul added. "Please keep him in your thoughts and listen to his playing to celebrate his life."

Malone joined CYNIC just in time to play on the band's classic debut album, 1993's "Focus". Malone proved to have quite a good musical chemistry with the rest of the band, and ended up hitting the road with CYNIC on the "Focus" tour.

After the band's initial break-up, Malone continued to work as a session bassist, performing on over 50 records. He also authored four books — "Music Theory For Bassists", "Dictionary Of Bass Grooves", "Rock Bass", and "A Portrait of Jaco: The Solos Collection" (a book of transcriptions of Jaco Pastorius's bass solos) for the Hal Leonard Corporation. In the academic field, Malone had papers on theory and music cognition published and gave presentations at conferences such as the Society for Music Theory, The International Conference of Music and Gesture, and The Glenn Gould Conference, and taught at the University of Central Missouri and Carnegie Mellon University as assistant professor of music theory.

Malone made one album under his own name, "Cortlandt", which was released in 1996 and reissued in 2007. He also assembled and recorded GORDIAN KNOT's self-titled debut, released in 1999. He rejoined CYNIC in May 2008 and played with the band for most of the past decade.

Malone is the second member of CYNIC's classic lineup to die in 2020. This past January, the band's founding drummer Sean Reinert was found unresponsive at his California home. He was only 48 years old. At the time, Malone issued a statement praising his former bandmate, saying Reinert "offered his trust during every rehearsal, every recording, and every performance we ever did, and it's likely that I'll never experience the same again. The truth is that we're all lucky — lucky to have been alive while Sean Reinert was making music."

I learned today that Sean Malone has died. I am numb and grief stricken. He had a brilliant mind, a gracious heart and...

Posted by Masvidal on Wednesday, December 9, 2020

Totally shocked and sad to hear of Sean Malone’s passing...he was a tremendous bass and stick player that I had the pleasure of working with many times through the years. He was my Geddy in Cygnus & The Sea Monsters, he played on the 1st OSI album w me...(cont.) pic.twitter.com/QKzt8VuhYN

...and we last toured together in 2014 when he was playing Bass in John Wesley’s band opening for Flying Colors. This is just another shocking loss in 2020...sadly the same year we also lost Sean Reinert, his rhythm section partner in Cynic. #RIPSeanMalone ?

Sad news, indeed. I’d only met #SeanMalone once or twice but respected him as a serious musician, underrated & with uncommon diversity. It’s unfortunate #Cynic is so overlooked, occupying a space that’s like a subgenre within subgenres (the prog/alt side of 90s death metal) RIP https://t.co/D3W88kyKgY