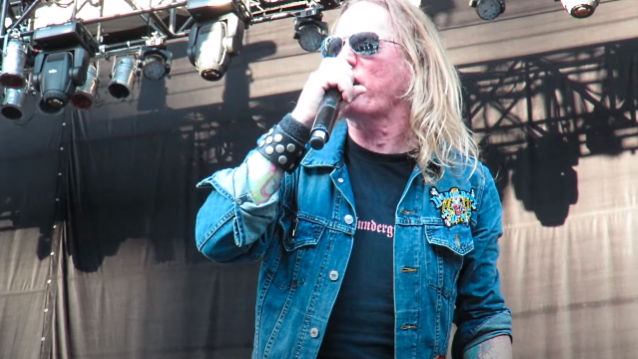 In a brand new interview with "The Chuck Shute Podcast", DANGEROUS TOYS frontman Jason McMaster spoke about the time he was approached by PANTERA about possibly singing for the group before Philip Anselmo connected with the fellow Texas metal act. "I was not asked to join PANTERA; I was asked to do an audition," he clarified (hear audio below). "They called me once, and then they called me twice, and both times, I was, like, 'Man, I'm in the middle of doing something. I'm in the middle of really trying to get this band off the ground.' It's nice to be asked. Plus, you have to remember, I was in a like a weirdo thrash metal band [WATCHTOWER] for almost a decade, and during that decade, for most of that decade, PANTERA was like a glam rock band. And so when they started to write really heavy, powerful, almost thrashy kind of angry metal — 'bro metal,' I think some people call it for fun… This was before 'Cowboys [From Hell]'. I hadn't heard anything from 'Cowboys', but I'd heard plenty of their other stuff with a different singer. I think if I would've gotten that gig, I would have been on the record that would have been the 'Power Metal' album. So that would have been '86 or '87."

McMaster also said that he was contacted by SKID ROW about auditioning for that band once Sebastian Bach had departed the group following the release of 1995's "Subhuman Race" album.

"When Sebastian left SKID ROW, [Dave] 'Snake' Sabo [guitar] called me a couple of times, and him and Rachel [Bolan, abss] really wanted me to audition for SKID ROW… I think that they write great songs, [but] I'm just not a huge fan. I don't own any SKID ROW [records]. I think that they're an excellent rock band… I mean, I might wake up one day and regret that decision, to not even try, but I was trying to get TOYS back on the road, and we were trying to write and get it together, and we had just made some decisions."

According to McMaster, he was one of several singers who were approached about auditioning for SKID ROW. "Sebastian was gone, so whatever year he was gone [is when they got in touch with me]," he said. "When he left, and here's a campfire, and Snake and Rachel are sitting around: 'Well, who do we wanna try out?' And my name was on the list."

Founded in 1987, DANGEROUS TOYS released four full-length albums and one live album before unofficially disbanding at the turn of the millennium.

Although DANGEROUS TOYS continues to perform live, the band has not released any new material since 1995.