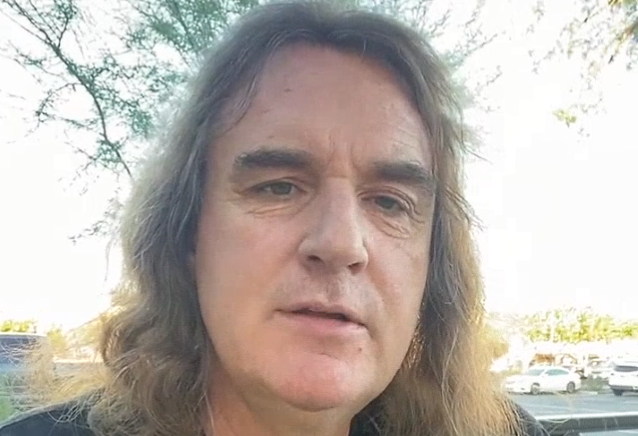 David Ellefson, who was fired from MEGADETH earlier this year following a sex video scandal, has returned to Cameo, the online platform that allows fans to buy personalized video messages from celebrities. The 56-year-old bassist is charging purchasers $30 per video and he is offering a "24-hour delivery."

Ellefson stepped away from Cameo for several months beginning in May, just days after sexually tinged messages and explicit video footage involving the bassist were posted on Twitter. At the time, Ellefson released a statement on Instagram denying all social media chatter that he "groomed" an underage fan. He also filed a report with the police department in Scottsdale, Arizona alleging unlawful distribution of sexually explicit images of him by unknown offenders. In the report, Ellefson admitted that he had been exchanging sexual text messages with a Dutch teenager, who captured a video of several of their virtual "masturbating encounters" without his consent and shared them with friends. (According to Ellefson, the woman was 19 at the time of their first virtual sexual encounter.) Ellefson, who lives in Scottsdale, first became aware of the video on May 9, when the claim "David Ellefson of MEGADETH is a pedophile" appeared on Instagram. Ellefson told police he was notified on May 14 by MEGADETH that the band would be parting ways with him. Three days later, he was fired.

David, a Christian who launched the Mega Life Ministries worship group in 2007, studied for a year at Concordia Lutheran Seminary in St. Louis nearly a decade ago.

Last month, Ellefson told SiriusXM's "Trunk Nation With Eddie Trunk" that there is a perception that people of faith must set a higher standard of how they live with and treat others. "It's almost like you're this entity that's floating up toward the heavens: 'Oh, he's such a wonderful man. He's a man of faith. He's got his family. And then this happens.' It's, like, 'What the hell is this?'" he said.

"I mean, look, admittedly I've sort of trained the public to think that I'm one of the more well-behaved rock stars out there, and for the most part I have been," he continued. "But at the same time, and this isn't to claim anything other than just, oops, shit happens. That is what it is."

Two days after MEGADETH leader Dave Mustaine announced Ellefson's latest departure from the band, the bassist released a follow-up statement in which he vowed to file a "defamation lawsuit" against the person who "illegally posted a very private video" of the bassist and made "false allegations" against him. He also said he was working with the police in Scottsdale "in their investigation into charges regarding revenge pornography to be filed against the person who posted the video. This person will be prosecuted to the fullest extent of the law," Ellefson wrote. He went on to say that he was "taking this time to be with my family" and wished his "bandmates" the best with their tour.

In July, Mustaine addressed the possibility of Ellefson returning to MEGADETH while filming a video message on Cameo. Asked by Rock Feed if Ellefson could once again play with MEGADETH at some point down the line, Mustaine said: "Any chance on Ellefson coming back later on? The answer to that is no."

The brainchild of founder Steven Galanis, Chicago-based Cameo has been around since 2017. It reportedly features more than 40,000 celebrities — from musicians and actors to drag queens and from YouTubers to Olympic gold medallists — who, for fees from $1 to $2,500, will offer video messages that mention another person by name. Happy birthday messages are common, as are baby announcements, but some celebrities have also recorded messages for Cameo users looking to quit their jobs or ask a potential date to a prom. The price for a video is determined by the celebrity. In 2020 alone, the company fulfilled more Cameos than throughout its four-year history, with Cameos delivered on every continent in the world and it raised over $1 million for worthy nonprofits and causes through its Cameo Cares program.