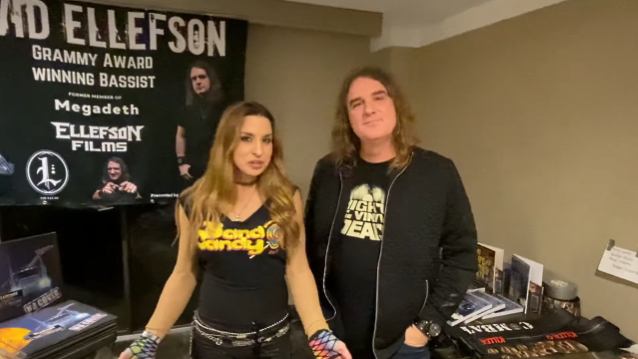 On October 30, pole dancer, actress and model Diana Lynn Band Candy conducted an interview with former MEGADETH bassist David Ellefson at the Chiller Theatre convention at the Hilton Parsippany in Parsippany, New Jersey. You can now watch the chat below.

Asked what the first concert was that he ever went to, Ellefson said: "KISS. I think it was February 6th or 7th, 1977 at the Met Center in Bloomington, Minnesota, which is in Minneapolis, on the 'Rock And Roll Over' tour. URIAH HEEP opened. I was 13, and I remember the tickets were five dollars and six dollars. Big bucks, right? I think I got the five-dollar [tickets]. I bought 'em well in advance. My mom and a friend of hers took me, my good friend Greg — we were grade school KISS fans — and my brother and one of his friends. My brother wasn't really a fan — he liked Elton John and the BAY CITY ROLLERS."

Ellefson, who was promoting his found-footage horror film "Dwellers" at the Chiller Theatre convention, joined THE DEAD ELVI, the Chiller house band which performs original music and serves as the backup group for musical guests on Saturday nights, to play a cover version of the Alice Cooper classic "I'm Eighteen". It marked the 56-year-old bassist's first live performance since being fired from MEGADETH

Ellefson was dismissed from MEGADETH six months ago, just days after sexually tinged messages and explicit video footage involving the bassist were posted on Twitter. At the time, Ellefson released a statement on Instagram denying all social media chatter that he "groomed" an underage fan. He also filed a report with the police department in Scottsdale, Arizona alleging unlawful distribution of sexually explicit images of him by unknown offenders. In the report, Ellefson admitted that he had been exchanging sexual text messages with a Dutch teenager, who captured a video of several of their virtual "masturbating encounters" without his consent and shared them with friends. (According to Ellefson, the woman was 19 at the time of their first virtual sexual encounter.) Ellefson, who lives in Scottsdale, first became aware of the video on May 9, when the claim "David Ellefson of MEGADETH is a pedophile" appeared on Instagram. Ellefson told police he was notified on May 14 by MEGADETH that the band would be parting ways with him. Three days later, he was fired.

Two days after MEGADETH leader Dave Mustaine announced Ellefson's latest departure from the band, the bassist released a follow-up statement in which he vowed to file a "defamation lawsuit" against the person who "illegally posted a very private video" of the bassist and made "false allegations" against him. He also said he was working with the police in Scottsdale "in their investigation into charges regarding revenge pornography to be filed against the person who posted the video. This person will be prosecuted to the fullest extent of the law," Ellefson wrote. He went on to say that he was "taking this time to be with my family" and wished his "bandmates" the best with their tour.