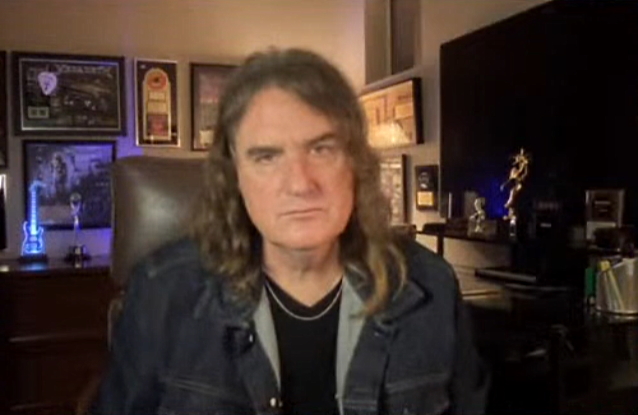 In a new interview with the "All Access Live! With Kevin Rankin" podcast, former MEGADETH bassist David Ellefson spoke about the challenges of navigating work and personal life in the months since sexually tinged messages and explicit video footage involving him were posted on Twitter. He said (as transcribed by BLABBERMOUTH.NET): "I think the main thing is there's a professional life and there's a personal life… In rock and roll, especially MEGADETH, we were always very transparent about stuff and talked very openly about — and maybe to a fault, to some degree — and I speak for me, letting people know who you are kind of on a personal level. 'Cause that really translates to the music, and that is the connection. This isn't just about being, and I think our genre set the stage for it, and probably the Seattle movement that came after us certainly took it to the next level, is the relatability of your music and your lyrics and your songtitles and the things you're singing about are the thing that your fans really sink their teeth into. And it's not like it just happened in one generation — it happened again and again and again, what, four decades in. So it's something that has real staying power to it, when you're honest about it. But I do think that there is this tendency to — you get a little bit, [and] everybody wants more. And social media and all this stuff where, all of a sudden, everybody's sharing what they ate for dinner and what they had at Starbucks. The mystique is gone.

"Fans still like their rock stars, man," he continued. "Rock stars are people that are not people — they're super human, and they live above human mortality, if you will. And it is that thing. And when all of a sudden rock stars become ordinary, they're not extraordinary anymore. I think that's a big thing. I try to have a professional life and a personal life, and those lines can get blurred a little bit. It's kind of, like, you're not welcome over to my house and you're not coming in and you're not having dinner with my family. There is a line on this stuff.

"I've always been approachable, I think, and I think that's a good quality," Ellefson added. "I've been sort of the one to de-escalate things and to be approachable, and I'd like to think that's a likeable trait. And I think that's what always worked well in the MEGADETH environment; that's a component of that that I think worked real well there. But at the same time, you don't always have to be so available — 'cause nobody is. Who is? I mean, the president isn't. Steve Jobs wasn't. We're doing other things. These moments like this where [it's] you and I talking, it isn't just you and I talking; the world is listening in, and we're hanging out with everybody. And there's these moments to do this and to be available, approachable and to hang out and kind of invite people in. I mean, look, I'm sitting in my house. This is probably the closest you're gonna get to getting in my house is right here. But this is the professional room; over there, that's the family room. And [there's] a door, and the door symbolically and even in reality separates professional life from family life. And I'm probably a lot more aware of that right now. I'm very hardlined on that now."

Ellefson was fired from MEGADETH earlier this year in the wake of online scrutiny, in which the bassist was accused of grooming an underage girl through videos and online messages. Ellefson has denied the allegation and has repeatedly said the woman in question had been a willing, consenting adult at the time of their virtual sexual encounter.

In 2004, Ellefson filed an $18.5-million lawsuit against Dave Mustaine, alleging the MEGADETH frontman shortchanged him on profits and backed out of a deal to turn Megadeth Inc. over to him when the band broke up in 2002. The lawsuit was eventually dismissed and Ellefson rejoined MEGADETH in 2010.

David, a Christian who launched the Mega Life Ministries worship group in 2007, studied for a year at Concordia Lutheran Seminary in St. Louis nearly a decade ago.