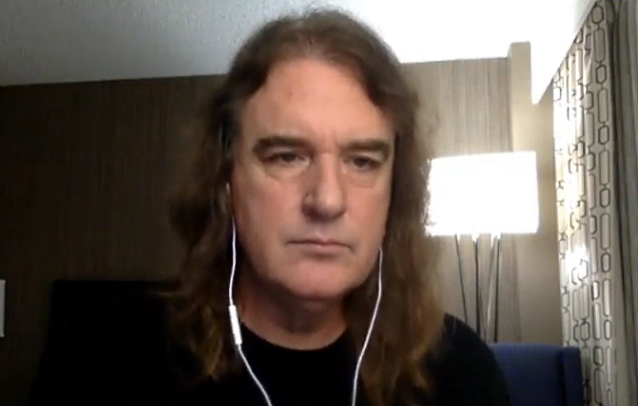 In a new interview with Joshua Toomey of the "Talk Toomey" podcast, David Ellefson was asked if he was nervous to see what people were going to say following his dismissal from MEGADETH five months ago, just days after sexually tinged messages and explicit video footage involving the bassist and a woman that is not his wife were posted on Twitter. "A hundred percent," the bassist responded (as transcribed by BLABBERMOUTH.NET). "Back in May, I was nervous to go to Starbucks. I went way off the radar and I just shut everything down. And I sought some counseling and therapy. I'm in the recovery community, and thank God they were very supportive, of course, 'cause that's what we do.

"[When] these big challenges come along in life, as we all have, whatever they are, you're forced to go, 'All right, This is bigger than me. This is more than I can deal with,'" he continued. "So, to go seek outside help — just go, 'What the fuck, man? I don't know. A bomb just went off and I'm fucking bleeding and my house burned down and there's shrapnel everywhere' — I'm glad that I had that.

"A lot of people, they would text and send me stuff. [And I was, like], 'Would you please stop sending me this shit? You're not helping me. You think you're my friend. If you wanna be my friend… Leave me alone or be supportive.' So that, I think, didn't help — the news frenzy that happens around this stuff. I think it's more for their fun than mine. Look, I'm glad I was able to provide such entertainment for everybody — a couple of weeks of some top news stories. You're welcome. And that gets shitty — the stuff that that gets pulled, and pulling my family into it.

"That's the thing, is I think all of us, we all look at someone else's life and go, 'Wouldn't it be great to be them?' And it's, like, man, if you only knew what was going on in their life, you'd probably gladly take all your problems back. You'd go, 'Yeah, that doesn't look as good as I thought, when it's behind the scenes.'

"We're all human. We've all got stuff. And I think that's what happens with these things — there are these moments when your humanness comes out. We all have our idols, we all have our heroes, but lo and behold, they bleed too. They're human, and that's kind of the way it goes."

Shortly after explicit video of him emerged online, Ellefson released a statement on Instagram denying all social media chatter that he "groomed" an underage fan. He also filed a report with the police department in Scottsdale, Arizona alleging unlawful distribution of sexually explicit images of him by unknown offenders. In the report, Ellefson admitted that he had been exchanging sexual text messages with a Dutch teenager, who captured a video of several of their virtual "masturbating encounters" without his consent and shared them with friends. (According to Ellefson, the woman was 19 at the time of their first virtual sexual encounter.) Ellefson, who lives in Scottsdale, first became aware of the video on May 9, when the claim "David Ellefson of MEGADETH is a pedophile" appeared on Instagram.

Two days after MEGADETH leader Dave Mustaine announced Ellefson's latest departure from the band, the bassist released a follow-up statement in which he vowed to file a "defamation lawsuit" against the person who "illegally posted a very private video" of the bassist and made "false allegations" against him. He also said he was working with the police in Scottsdale "in their investigation into charges regarding revenge pornography to be filed against the person who posted the video. This person will be prosecuted to the fullest extent of the law," Ellefson wrote.

David and his wife have been married for 27 years. They have two children.