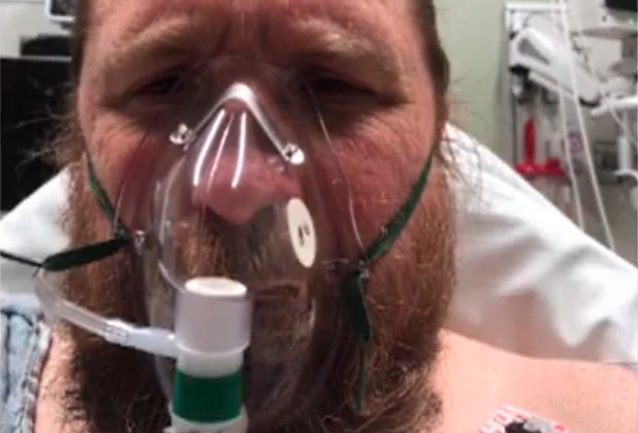 DEATH ANGEL drummer Will Carroll has once again spoken out about his battle with COVID-19, the disease caused by the new coronavirus. The musician, who spent almost two weeks on a ventilator in an intensive care unit at a Northern California hospital, first got sick when he and the rest of DEATH ANGEL spent more than a month on the road in Europe with TESTAMENT and EXODUS as part of "The Bay Strikes Back 2020" tour.

Carroll discussed his experience of testing positive for the life-threatening illness during an interview with Germany's "Rockpalast". Asked what he thinks about people who claim that the coronavirus is "just a flu" and that the impact of the virus has been vastly exaggerated, Carroll said (see video below): "I've had the flu before, and just from experience, this was a thousand times worse. Just struggling to breathe is really the scariest thing I've ever experienced — fighting to stay alive, it felt like. And since then, I've gone to the doctor regularly, and I've taken two or three COVID tests since I've gotten out of the hospital. I've been very cautious — always wearing my mask when I go outside and doing what I can to stay on the positive side of things."

Carroll was also asked for his opinion on how Donald Trump has been handling the coronavirus crisis, with America's 45th president downplaying ongoing spikes by attributing a rise in cases to increased testing.

"I try not to get too involved, 'cause I'll just lose my mind," Will said. "Whenever I do see what he's up to and the words he has to say about the coronavirus, it's very frustrating; I get very angry. So, like I said, I don't look at it daily. I would be a mess. So I try to avoid it as much as I can."

During the chat, which was recorded days before this year's U.S. presidential election, Carroll also touched upon the fact that failures in political leadership have created a polarized atmosphere that makes it harder to contain the pandemic.

"Things are very tense over here," he said. "And unfortunately, a lot of people I've known for many, many years, I'm starting to see an ugly side to some of these people I've known for years and years and years. It's definitely polarizing, and it's bringing out the worst in some people, unfortunately. And I don't know what to do about it. I mean, there's nothing I can do about it — except for vote properly. [Laughs]"

Carroll woke up from a medically induced coma on March 30 after spending nearly two weeks on a ventilator. His doctors at the California Pacific Medical Center told the San Francisco Chronicle he was in critical condition and came close to dying. They said that the hospital "tried every treatment they had heard about, from hydroxychloroquine and azithromycin to the experimental drug remdesivir."

"He still was near the limits of what we could do with our supportive care, and we were very worried about him," said Dr. George Horng, a pulmonologist.

"He wasn't getting worse, but if he were to get worse, there wasn't much more that we could have done."

On March 22, TESTAMENT singer Chuck Billy revealed that he had tested positive for COVID-19. Several days later, EXODUS guitarist Gary Holt also said that he was infected with the new coronavirus. Both had spent more than a month on the road with DEATH ANGEL as part of "The Bay Strikes Back 2020" European tour in February and March.

DEATH ANGEL had been touring in support of its ninth album, "Humanicide", which came out in May 2019 via Nuclear Blast.

Carroll joined DEATH ANGEL in 2009 as the replacement for the band's original drummer, Andy Galeon.