Dutch metallers DELAIN will issue a new EP in the fall via Napalm Records. The band will promote the EP's release by playing two intimate headlining shows on in October.

DELAIN is scheduled to make appearances at several European festivals this year and embark on a South American tour with NIGHTWISH.

As previously reported, DELAIN is working on material for the follow-up to 2016's "Moonbathers" album. "We're writing," keyboardist Martijn Westerholt told Heavy New York before a recent concert on the band's North American tour as the support act for KAMELOT. "Right now, we're not, because we're touring the U.S. and Canada, of course. But when we're back [from the road], we will continue writing. It's a little bit quiet on purpose, because we wanna focus on writing. And the plan is to release [the new album] next year, so let's hope it works out."

Last year, Westerholt told music journalist Joel Gausten that DELAIN would spend most of 2018 away from the road as the band works on its next disc. He also confirmed that DELAIN's next album will mark the first time guitarist Merel Bechtold will be involved with one of the band's full-length recordings from the start of the creative process. "That's true, but in our case, it's never a big issue," he said. "To be frank, [singer] Charlotte [Wessels], [studio collaborator] Guus [Eikens] and I already do everything, and we do try — and are very open — to welcome band members to participate on it. But this train is rolling with or without them — preferably with them. But for us, it's not a big issue. We do like to have them involved and stimulate that. For example, Timo [Somers, guitar] did a lot of guitar arrangement on our previous album. I don't think people will hear a big difference. With all due respect to Merel — because she's great — it's not the way DELAIN works, so to say. But I do hope that she will contribute, and she surely has the talent for it. She's very creative, so let's see what happens."

DELAIN spent much of 2016 and 2017 celebrating its tenth anniversary — from the release of "Moonbathers" and an anniversary edition of its debut disc, "Lucidity", to extensive headline tours across Europe and North America to gracing some of the world's biggest festival stages — and capped it off with the release of its first-ever live DVD/Blu-ray package. 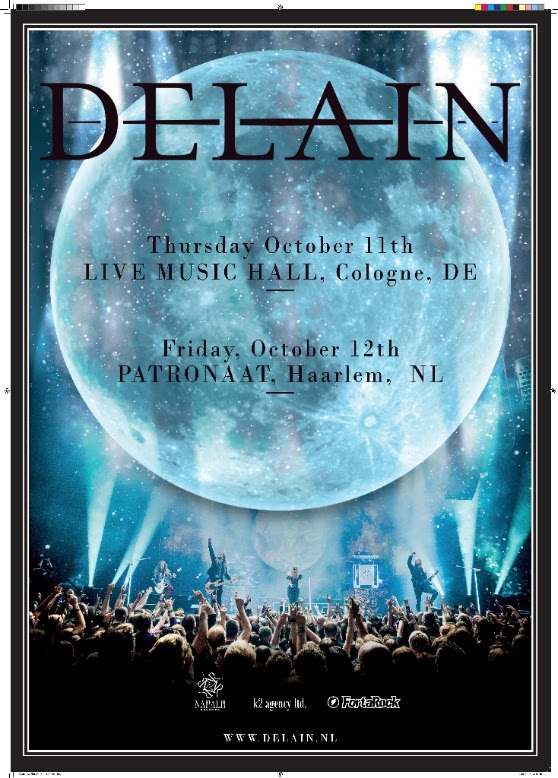