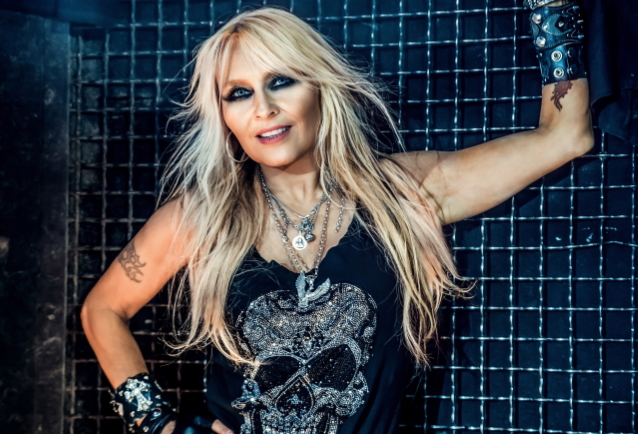 In a new interview with Metal Shock Finland, Doro Pesch was asked if there is anything she would still like to achieve 40 years into her career as a heavy metal singer. She responded: "I always try, with every song, every album, every gig — small or big; that doesn't matter — to make people feel good and to give them a lot of power and energy. And it would be awesome if I could it for a long time, and if I could do — I don't know — maybe 10, 20 more records, that would be awesome, and do what I love to do. I love people, and that's, I guess, what I'm here for — I just wanna make people feel great and get inspiration, motivation and positive metal power. So that's what I would love to continue doing. There's not much — I don't have any other dreams. I'm definitely living the dream — making music."

The 56-year-old German musician continued: "I always wanted to become a singer, since I was three years old, and that was, for me, like, 'Wow!' Like when I quit my job. That was actually when we got the JUDAS PRIEST tour. Then I quit my job; I was a graphic artist. And I thought, 'I would love to do it for the rest of my life, if that's possible.' But I love animals too. That's my other passion. And I just wrote a song for the new album, and it's called 'Heavenly Creatures'; that's a work title. I love dogs and horses — and all animals. But I'm always trying to help out some animal shelters."

Asked if it's likely that fans will get a new album from Doro in 2021, she said: "Yeah, next year, and then hopefully a nice tour behind the new album. But we'll see. We have already six songs, so I think middle of next year, the album [will be done]."

Doro's new LP will be the follow-up to "Forever Warriors, Forever United", which came out in 2018. The double album featured 19 regular tracks and six bonus songs.

Compared to her previous efforts, "Forever United" took a more sentimental turn, with lyrical topics covering friendship, love and companionship. A highlight was Doro's tribute to the late and great Lemmy. The album cover artwork was once again created by Doro's favorite artist, Geoffrey Gillespie. It portrayed Doro in the middle of a swarm of wild metal heads exuding attitude, power and positive vibes.

Pesch played three drive-in concerts in her home country this past summer. The shows complied with Germany's social distancing regulations amid the coronavirus pandemic.

Doro released a video for her new single, "Brickwall", in June. The track was made available digitally via Nuclear Blast and on vinyl on July 31.