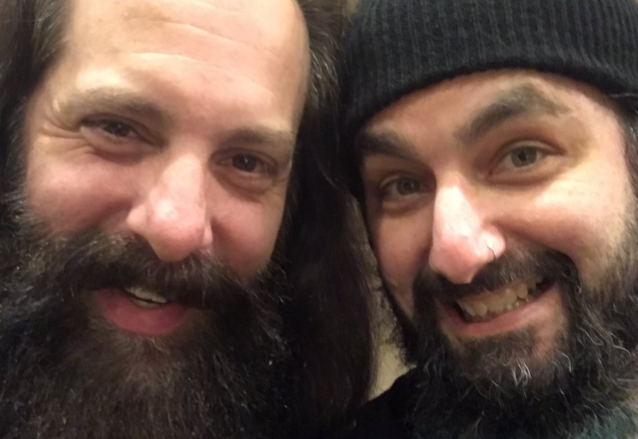 Petrucci discussed his musical reunion with Portnoy during a lengthy chat with the official DREAM THEATER fan club. He said (see video below): "Mike is playing drums on this [record], which is really awesome. Obviously, Dave LaRue played on my first solo album, 'Suspended Animation', and also I toured with [him] many times with 'G3', as in the past Mike Portnoy, we toured together with 'G3' as well — in fact, from the very first 'G3' back in 2001 or so. But, yeah, having Mike play drums on this was cool. It was a great experience."

Speaking about how his renewed collaboration with Portnoy came about, Petrucci said: "[Mike and I] been talking a bunch and he had sort of planted the seed in my ear. I was telling him about [my plans to record a new solo album], and he was, like, 'Well, if you need somebody, I'm available.' And it was, like, in my head, I'm, like, 'I'm gonna take you up on that.'

"I had written all the songs and we programmed drums," he continued. "And I played bass, and our engineer played bass, so we had these completed songs. And Mike came in, learned everything, of course, added his touches and taste. [He] did a tremendous, spectacular job. It was a lot of fun to kind of reunite musically and do that together. It took about six days to do. Again, he did a great job. The drums sound awesome. Dave recorded his stuff remotely, redid all the bass. And it's mixed by Andy Sneap — it's my first time working with Andy, and he did a tremendous job mixing it. He's actually currently in JUDAS PRIEST playing guitar after Glenn [Tipton] couldn't do it anymore. And he is an unbelievable mixer with an incredible résumé. He did mix 'Firepower', the latest JUDAS PRIEST, and a whole bunch of other stuff — KILLSWITCH [ENGAGE] and ARCH ENEMY and MACHINE HEAD, and it goes on. He's amazing. So, the album sounds great."

Regarding why he chose to record his second solo LP now, Petrucci said: "Originally, before the whole pandemic hit, I had planned on working on my solo album, because DREAM THEATER had some touring coming up, but there were, like, chunks of free months in the year. So I was, like, 'If I don't start it now, I'm never gonna do this.' And then everything hit and closed down and everything got postponed, so I found myself with all this time on my hands. Basically, very shortly after I got home from that [last DREAM THEATER] tour, I started working on my solo album — two months straight, five days a week. I got it done in about three months."

Asked how much of the material on "Terminal Velocity" is brand new and how much of it is left over from previous songwriting session, Petrucci said: "There are nine songs on the album, and two of them I had played live on 'G3' previously and at my [guitar] camp. One of them is a really old song from the early '90s when I was doing guitar clinics. Actually, it's called 'Gemini', and there's a snippet of it on the 'Rock Discipline' video I did back in '95; there's a little bit of me playing that. So, for anybody that knows of that song, it's sort of an interesting little throwback to that, 'cause I never got a chance to really record it properly. There was one song I had written, I guess, around the same time as 'Happy Song' and 'Glassy-Eyed Zombies' that I played on 'G3', but I never did anything with it. Honestly, I kind of forgot I had it. It's called 'The Way Things Fall'. When I was looking through all my files and everything, I was, like, 'I forgot about this song,' and I had a full demo of it. I was, like, 'This is really cool.' So I was able to record that for real. And then that leaves the remaining five songs, which are all brand new. And I wrote those and recorded those, along with the other four, again, over about two months."

Portnoy, who co-founded DREAM THEATER more than 30 years ago, abruptly quit the band in September 2010 while on tour with AVENGED SEVENFOLD. He has since been replaced by Mike Mangini (ANNIHILATOR, EXTREME, JAMES LABRIE, STEVE VAI).

Since the 2010 departure of Portnoy, Petrucci, along with keyboardist Jordan Rudess, has taken on much of the songwriting load for DREAM THEATER, including 2016's controversial double concept album, "The Astonishing", and last year's "Distance Over Time".