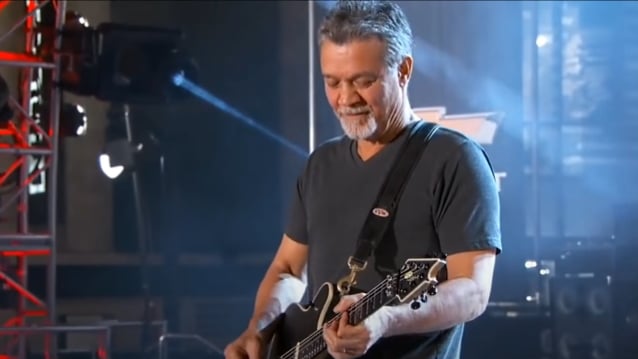 A memorial honoring legendary VAN HALEN guitarist Eddie Van Halen in his former hometown of Pasadena, California has received a "formal approval" to be installed near the city Convention Center, which is next to the Civic Auditorium, where VAN HALEN played a number of times between 1975 and 1978.

The memorial tribute push has been spearheaded by Randa Schmalfeld and Julie Kimura, two Pasadena residents who raised $6,500 through GoFundMe donations from fans from around the world for a permanent memorial in the city.

In a September 16 update on the Pasadena 4 Van Halen GoFundMe page, Randa wrote: "Julie and I are so grateful for your patience, and we finally have a BIG announcement!

"Our plaque has been vetted by the Van Halen Family and approved by The City of Pasadena, and the Executive Board of the Pasadena Civic Operating Company. As you know, we have been working towards this for some time and we are delighted to share that the plaque has been ordered and will be fabricated very soon.

"The plaque will honor the early days of VAN HALEN and the importance of their performances at the Pasadena Civic in the 1970's. In addition to a brief description about the Van Halen family and the band, and their relationship to Pasadena, it will also include the infamous VAN HALEN logo, which the band has approved for display on the plaque. Pasadena 4 Van Halen will be acknowledged on the plaque for the generous donations that you have all made to support this effort. It's going to be so beautiful and we can't wait for you all to see it one day soon!

"The details surrounding the fabrication and installation of the plaque are still being worked out. We will keep you informed as we learn more, including details on when the plaque will be unveiled."

Julie A. Gutierrez, Pasadena assistant city manager, wrote in her weekly newsletter dated September 16, 2021: "Eric Duyshart, Economic Development Manager, reports the Pasadena Center Operating Committee recently reviewed and endorsed the language and location of a memorial plaque to be placed in honor of the late legendary guitarist, Eddie Van Halen, a member of the award-winning band VAN HALEN, on their site.

"Following the passing of Eddie Van Halen on October 6, 2020, the City received several requests and suggestions from the community to do or name something in Mr. Van Halen's honor to recognize both his local connection to Pasadena, as well as the impact that his artistry had on music. Given the band's connection to Pasadena and the hometown pride expressed by residents, several requests have been made to name a street, alley, or other monument (including a memorial plaque) in the band's honor. Pasadena 4 Van Halen, a local group has raised money to fund this effort.

"The placement of monuments, including memorial plaques, is under the administrative jurisdiction of the City Manager. Monuments must meet criteria for appropriateness, compatibility with the surrounding environment, impacts on existing use, etc. The Executive Committee of the PCOC endorsed the overall effort to place a plaque outside the Civic Auditorium, a location where the band played several of its earliest perfo1mances. It is anticipated that the fabrication of the plaque will take several weeks and will be ready for installation and a dedication sometime around the anniversary of the late musician's passing."

This past April, Pasadena Now reported that the Eddie Van Halen memorial near the city Convention Center could not — due to legal issues — contain Van Halen's likeness or his famous "Frankenstrat" guitar.

Last October, a City Council meeting was held in Pasadena where a memorial honoring Eddie was discussed.

City manager Steve Mermell was directed to come up with ideas for how to best honor the musician, who died earlier that same month at the age of 65.

In the first three weeks after Eddie's death, the city was bombarded with requests to pay tribute to the guitarist "to recognize both his local connection to Pasadena, as well as the impact that his artistry had on music," Mermell wrote in a report.

"Recognizing Van Halen the band and/or individual members should be considered," according to the report. "With his passing, Eddie Van Halen's international recognition as a musical artist is noted for the significant impact he had on the Rock & Roll genre and his legacy is a source of hometown pride for the city."

Following Eddie's death after a long battle with cancer, fans left flowers at his childhood home on Las Lunas Street in Pasadena. Additional flowers, candles and fan mementos were placed on Allen Avenue where Eddie and Alex scratched their band's name into the wet cement of a sidewalk when they were teenagers. 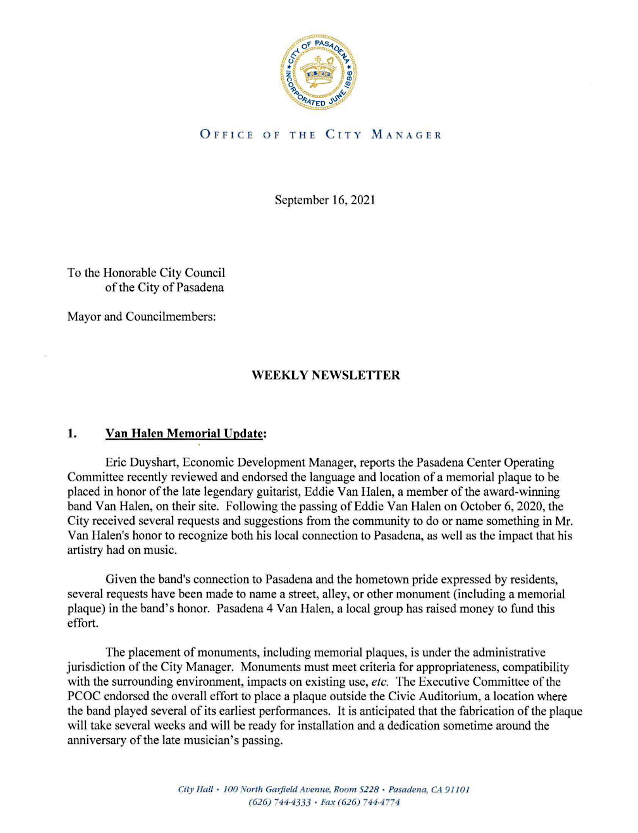