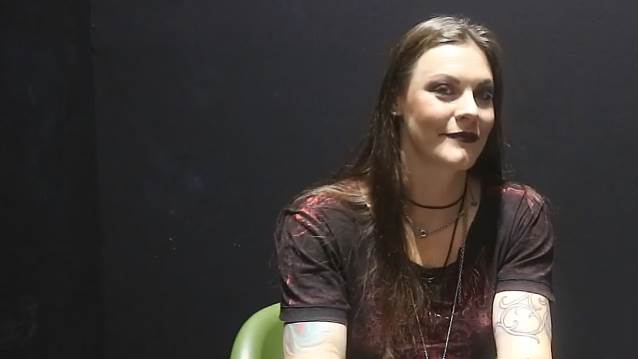 Hayley Leggs conducted an interview with NIGHTWISH singer Floor Jansen at this year's Hellfest, which was held last month in Clisson, France. You can now watch the chat below.

Asked if she has heard any of the new NIGHTWISH music, keyboardist and main songwriter Tuomas Holopainen has been working on for the follow-up to 2015's "Endless Forms Most Beautiful" album, Floor said: "No. We are in the middle of this world tour, and the entire focus of everybody is here now on the 'Decades' world tour. But when he gets home, in the privacy of his songwriting world, he's working on stuff. And, of course, I've been asking, but all in good time. So that's his right, of course."

Although Tuomas has been working on music for the next NIGHTWISH disc completely by himself so far, Floor believes that he will eventually open it up to contribution from the other members of the band. "At some point, yes," she said. "As soon as you start playing things together, input automatically comes. And up until what extent, that's something that happens along the way, as we noticed with 'Endless Forms Most Beautiful'. But an actual song [from one of the other members], that doesn't happen so often. I know that Marco [Hietala], our bass player, has been contributing in the past, and I'm sure he will [again in the future], if there is something that fits. And I could do the same if I would have something. [I could say], 'Tuomas, you have to listen to this. I think it would fit.' For me to be able to sing what he has in mind and interpret everything, there's a lot of creative energy used for that. And that really works."

Since Floor was one of the main songwriters in all the previous bands she was involved in, she was asked if she ever feels the urge to get in there and get more involved in the composition process for NIGHTWISH. "Funnily enough, no," she replied. "You would say after so many years of having more creative input in that sense, I don't really feel it that way, just because things are really good. Like I said, the creative input that I can have at the moment is really enough. And the feeling that we are making these songs as a band, even though originally everything comes from his mind, as soon as we start playing it, it becomes not a Tuomas Holopainen song but a NIGHTWISH song. And to have the freedom there, that really works for me."

Holopainen said in a June 2018 interview that he had "70 [or] 80 percent of the material written" for the next NIGHTWISH album. He added: "The idea is next summer, in June of 2019, we're going to go to the rehearsal camp once again, start working with the album, record it, and, if everything goes as scheduled, we're looking at a 2020 springtime release, followed by a massive tour, of course."

NIGHTWISH's next album will mark the band's second full-length release with Jansen, who has been touring with the group since 2012.