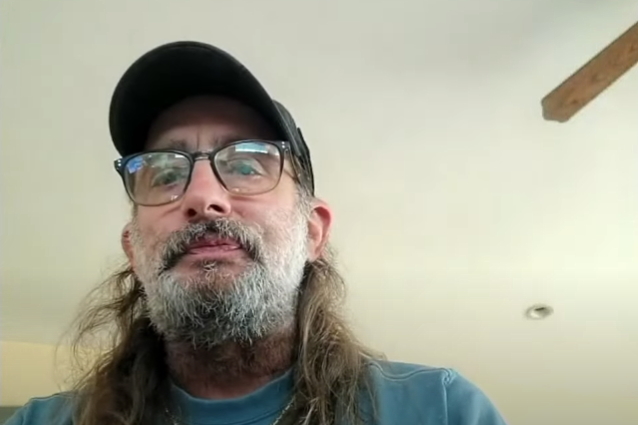 Former EXODUS guitarist Rick Hunolt says that getting fired from the band "damn near took [him] out."

Hunolt — the other half of the famed EXODUS "H-Team" who is on every studio recording from 1985 through 2004 and co-wrote some of the band's best-known songs such as "A Lesson In Violence" and "Deliver Us To Evil" — left EXODUS after the band's highly acclaimed 2004 reunion album, "Tempo Of The Damned". Following his departure, Hunolt was replaced by HEATHEN guitarist Lee Altus.

Rick discussed his exit from EXODUS during an appearance on "Put Up Your Dukes", the new podcast hosted by ex-EXODUS singer Rob Dukes. He said (as transcribed by BLABBERMOUTH.NET): "During the recording of 'Tempo', Gary [Holt, EXODUS guitarist] had just gotten clean a little while prior to that, and I was still using. But I've gotta say, Gary Holt — my hat's off to the man for… He never sweated me. Not once did Gary say, 'Dude, you're a piece of shit. I'm gonna fire you from the band if you don't get your shit together.' He never said nothing. He let it take its course, you know what I mean?

"I was a mess," Rick continued. "We all were, but everybody got better, and I didn't. I fell down the rabbit hole even worse, I think, because I was just so depressed. I couldn't stop. I don't know what was up… To the point where I was gonna lose my position in the band I'd been in for over 20 years — my best friends, my life. Yeah, it was dark as fuck.

Rick revealed that he went through a particularly difficult period after splitting with EXODUS. "I had to reinvent myself at 40-plus years old, [with] two little kids," he said. "I ended up moving out of Oakland. I had to get the fuck out of there, 'cause we were living at the studio; it was bad. And then we moved in with my wife's mom and I got a job at the [discount chain] Dollar Tree and I ended up working there for, like, two or three years. I mean, I can go on and on and on. But long story short, I met a guy who knew who I was and offered me a job on his ranch. And the rest is history. He taught me how to live my life and make money."

The San Francisco Bay Area thrashers' new disc is the follow-up to 2014's "Blood In Blood Out", which was their first release since the departure of Dukes, the group's lead singer of nine years, and the return of Steve "Zetro" Souza, who previously fronted EXODUS from 1986 to 1993 and from 2002 to 2004.

Back in April 2019, Hunolt rejoined Holt and other EXODUS members Tom Hunting (drums) and Souza to perform several of the group's classic songs during a METAL ALLEGIANCE concert in San Francisco, California. More recently, Hunolt joined EXODUS on stage in August at Psycho Las Vegas in Las Vegas, Nevada.

The original lineup of EXODUS consisted of guitarists Kirk Hammett (now in METALLICA) and Tim Agnello, Hunting and vocalist Keith Stewart. Holt joined the band in 1981, while Kirk left two years before EXODUS's debut album, "Bonded By Blood", saw the light of day.