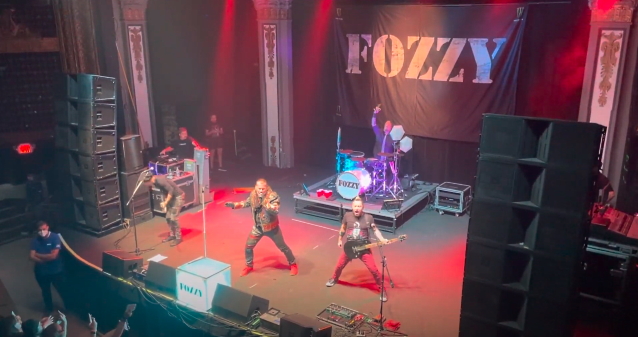 Guitarist Rich Ward was unable to join FOZZY on stage last night (Thursday, September 2) in Columbus, Ohio for personal medical reasons. He is currently recovering under the care of medical providers and is expected to be back on tour, providing his high-energy performance, very soon. Meanwhile, FOZZY still performed a full set last night and will continue to do so until Rich's return for the first time ever as a four-piece.

Fan-filmed video footage of the Columbus concert can be seen below.

Ward's illness came on the same day that his ex-wife, former professional wrestler Shannon Spruill (a.k.a. Daffney Unger), was found dead at age 46.

According to People, Spruill sparked concerns on Wednesday (September 1) after she posted an Instagram video that showed her holding what appeared to be a small gun. In her video, she discussed potentially having symptoms of chronic traumatic encephalopathy (CTE), a degenerative brain disorder caused by repeated concussions.

Spruill's friend Lexie Fyfe told the New York Daily News that Shannon was found on Thursday morning, adding, "This last act, I don't want it to define her. She would always want people to reach out for help and to check in on those they're worried about. We're going to miss her."

In May, FOZZY dropped a video for its first new song in two years, "Sane", which hit one million views in its first two weeks. This first-of-its-kind video was filmed on the longest wooden roller coaster on the planet today.

This past February, FOZZY singer Chris Jericho told Detroit's WRIF radio station that the band's follow-up to 2017's "Judas" album would "continue with the momentum that [the] 'Judas' [title track] started for us [four] years ago."

Last summer, Chris revealed that FOZZY's next LP will contain 12 songs, including one cover.

Ward and producer Johnny Andrews once again did "the lion's share" of the songwriting for the new LP, which was recorded primarily in Atlanta, Georgia.