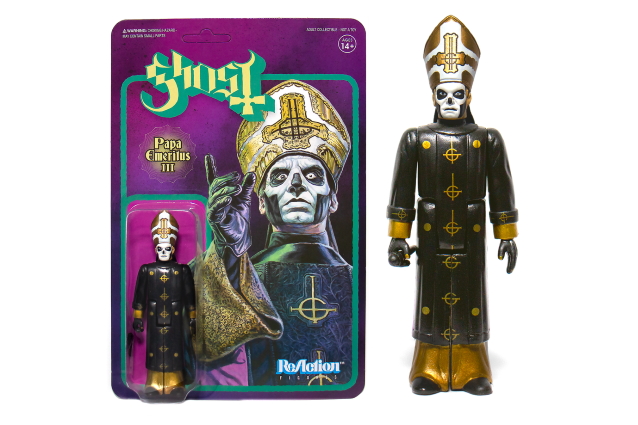 Global Merchandising Services and Super7 have collaborated to create a 3.75-inch ReAction figure for the Swedish metal band GHOST. The figure is based on the character of the sinister pope Papa Emeritus III, who was the front man on GHOST's third album "Meliora". This ReAction figure embodies the dark themes and ominous charm of the original pontiff. The figure is also available through select independent retail stores.

Super7 is the premier pop-culture design house and producer of lifestyle-oriented collectibles, toys and apparel based in San Francisco. Led by designer and founder Brian Flynn, Super7 has harnessed the graphics, aesthetics and energy of his youthful obsession with science fiction, giant monsters, comic books, punk rock, skateboarding, robots and rebellion to build a unique and innovative business that crosses all categories and is not bound by traditional manufacturing boundaries.

As is with all things GHOST, Papa Emeritus III is a creation from the band's satanic mastermind Tobias Forge, the singer, songwriter, musician and architect of the elaborate storylines that are woven through the band's four full-length studio albums, EPs, music videos, webisodes and live shows, all of which advance the GHOST storyline. The band's current album, "Prequelle", yielded three Top 10 Rock tracks — "Rats", "Dance Macabre" (both of which went to No. 1) and "Faith". GHOST has received three Grammy nominations: "Best Metal Performance" in 2016 for "Cirice", which the band won, and "Best Rock Album" for "Prequelle" and "Best Rock Song" for "Rats" in 2019.

This past December, Forge revealed to Finland's Kaaos TV that he would record one new song in January before getting to work on GHOST's fifth album.

Forge did not reveal where the standalone song will surface, but he added that he''ll continue writing through May, with plans to enter the studio on June 1. He remarked: "Hopefully then we're gonna start recording the drums for all these 15 songs — something like that — I'm gonna write. Some of them are written, some of them are in bits and pieces, and some of them I don't know yet."

The musician, who plays most instruments on GHOST's albums except drums, added that he wants to create songs meant to be played in large venues, saying: "Making a new fifth album means that I'm gonna continue writing songs that will sound great on [an arena stage]."