Grammy-winning Swedish rock band GHOST is known for special, limited-edition items that have been tied to its various album releases — an 8-track edition of "Ceremony & Devotion", and for "Prequelle", a seven-inch die-cut-as-rats vinyl disc of the album's first single "Rats", offering the album on a variety of different colored cassette tapes, and the lenticular cover for "Prequelle"'s special vinyl edition as well as five alternate covers for the retail edition. On September 27, GHOST will release a plethora of limited, exclusive items tied to the "Prequelle" album and world tour: the deluxe collector's edition, "Prequelle Exalted", with only 5000 sets produced. Log on to ghost-official.com for all purchasing information.

An "unboxing" video of "Prequelle Exalted" can be seen below.

Included in the "Prequelle Exalted" deluxe collector's limited edition will be:

For the arena tour hardbound photo book and the exquisite, suitable-for-framing 12" X 12" prints, Ryan Chang photographed GHOST on tour over the course of a year, documenting the band's live performances throughout Europe, Canada and the United States, including the special guest spots on METALLICA European "WorldWired" stadium tour this summer. The 12-page booklet of new prints was created by GHOST's longtime visual collaborator Zbigniew M. Bielak, offering 10 stunning illustrations, each one a visual representation of the 10 songs on "Prequelle".

"Prequelle" was produced by Tom Dalgety and originally released in on June 1, 2018. The album was nominated for a Grammy Award as "Best Rock Album", and for Sweden's Grammis award as "Best Rock/Metal Record Of The Year", and Dalgety received a Grammy nomination as "Producer Of The Year." Both Revolver and Kerrang! magazines named "Prequelle" the best album of 2018, and the album produced three Top 10 singles — "Rats", "Dance Macabre" (both of which went to No. 1 at Rock Radio) and "Faith". To date, "Prequelle" has accumulated some 250 million streams globally. 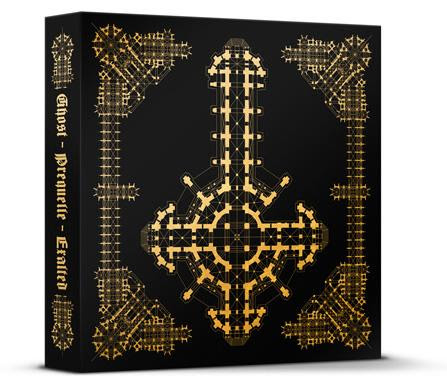