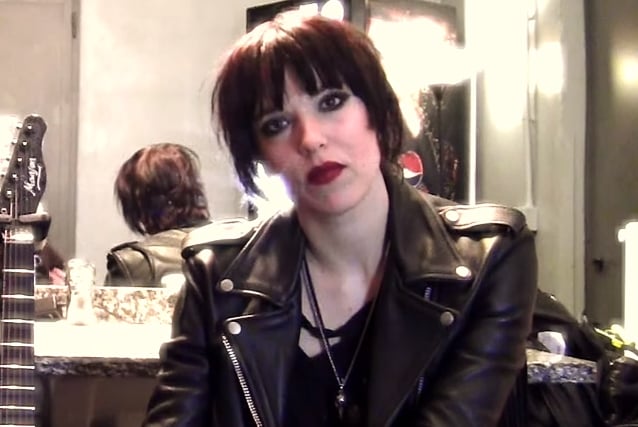 HALESTORM frontwoman Lzzy Hale has told Italy's Linea Rock that she doesn't spend a lot of time worrying about what other people think about her, both as an entertainer and a human being. "Personally, for me, I don't really preoccupy myself with other people's opinions, whether they're good or bad," she said (see video below). "You just kind of say, 'Oh, thank you,' or whatever. And that's about it… I go reading [comments online], and we laugh about 'em and everything, especially some of the weirder and more negative ones — we'll have parties and make fun of people talking shit about us.

"For me, my center of who I am and my opinion of myself is, for me, more important than the opinions of other people about me," she continued. "So, as long as I know that I'm trying to be the best person and the best singer and the best performer that I want to be inside, then I'm okay. I'm always my biggest critic, and so therefore, everybody can think that I'm the greatest, or everyone can think that I'm the worst, and I don't care. But as long as I know that I'm trying my best and I'm doing my thing, then I'm good."

According to Hale, she uses her position as an internationally recognized performer to establish herself as a positive role model for not only young women, but also for the younger generation.

"The great thing about having this, I guess, platform… All of a sudden, just in the past couple of years, I'm in a position where people are listening to what I say," she noted. "So I've made a choice to, when I do put myself out there — if I'm saying hello to fans, or if I'm talking on the Internet, or if I'm sending a message out into the world, I always want it to be positive. I want to be a voice for love and equality and ownership of oneself, and I think that I've made that my mission in the past couple of years. Because there's too much crap in the world, and there's too much negativity, so if people are going to listen, they're gonna get a lot of love from me. So there. [Laughs]"

HALESTORM, which began in Red Lion, Pennsylvania in 1997, won its first Grammy in 2012 in the category of "Best Hard Rock/ Metal Performance" for "Love Bites (So Do I)".

Last month, the band was nominated for "Best Rock Performance" in the 2019 Grammys for its song "Uncomfortable".

HALESTORM's fourth album, "Vicious", was released in July. The disc was recorded in a Nashville, Tennessee studio working with acclaimed rock producer Nick Raskulinecz, who has worked with bands like FOO FIGHTERS and ALICE IN CHAINS.