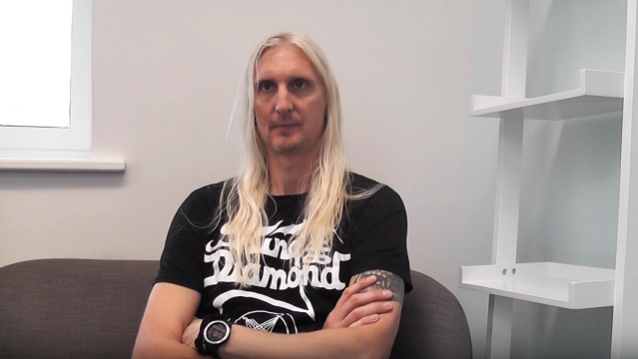 Record Collector recently conducted an interview with guitarist Oscar Dronjak of Swedish metallers HAMMERFALL. You can watch the entire chat below. A few excerpts follow (transcribed by BLABBERMOUTH.NET).

On whether the band's sound has changed since they signed to Austria's Napalm Records in 2016:

Oscar: "No. Nothing has really changed. HAMMERFALL will always be the same whether we're on Napalm, Nuclear Blast or anywhere else. I think that's one of the things that I liked so much about this thing — we don't have to compromise with anything. No one has ever told us, or they have told us, it's never happened, that, 'You should write a song like this?' Or 'More ballads.' They try to influence us, but we don't listen. This is really important for us that we get to do our own vision of HAMMERFALL. Nobody knows what HAMMERFALL is but us."

On what inspired "(We Make) Sweden Rock", the first single from their forthcoming "Dominion" studio album:

Oscar: "It was Joacim's [Cans, vocals] idea from the beginning. He actually, I think he had an outline on exactly of what he wanted to do already from the beginning. It wouldn't surprise me — that's exactly the type of person he is. He's very well-prepared and plans ahead; he thinks through properly. He came up with this idea, 'What if we came up with this song '(We Make) Sweden Rock'?' It's about this whole Swedish musical hard rock, metal [scene] that we have. There are a quite a few bands nowadays from Sweden. I thought it was a great idea. Because it could be corny or cheesy if you do it wrong, but the way he outlined it, it was a good idea, I thought, just to take references from all these bands that have influenced us, or influenced other bands or artists from Sweden. Just references to them to try create cool lyrics, which is exactly what he did. Then he also had the idea for the video with all these bands, so it was a big part of the whole idea, to put them in focus a little bit as well, both the unknowns and the well-knowns."

On HAMMERFALL's early lineup, which included DARK TRANQUILLITY vocalist Mikael Stanne, as well as members of IN FLAMES:

Oscar: "The way I see it, before Joacim is when we had Mikael Stanne from DARK TRANQUILLITY on vocals. His vocal style was very limited, like narrow. He tried to sing as good as he could, but Joacim's range is so much bigger that when Joacim came into the band, my eyes and ears were, like, 'Whoa, what is this now?' It was such a big difference. That's when I first felt that, 'Okay, now HAMMERFALL is starting to sound the way I had always envisioned somehow.' With these guys, we played with people, I played with people that I knew liked melodic metal. There weren't that many of them around in the mid-'90s, early '90s. We just played together for ourselves to have fun. We didn't have aspirations or dreams of anything. But when Joacim came into the band, that's when it started to all come together a little bit. Then, things started happening really fast after that. For me, even if we had HAMMERFALL for a couple of years, when Joacim came into the band, that's when sort of the 'real' HAMMERFALL was born, so to speak."

On HAMMERFALL "staying true" to its style versus a band like OPETH, whose music has evolved in recent years:

Oscar: "OPETH have their own journey. I've never doubted what HAMMERFALL is or should be. That's been absolute since day one, I knew exactly what HAMMERFALL was. Then how we realized that vision, that has been different. With the addition of Joacim, that's a big thing. His part, the songs that we've written together since are, of course, are an important part of this as well. HAMMERFALL, we've always been on the same path. We haven't deviated very much. That just fits us. The thing is, I didn't like death metal bands who all of the sudden started playing heavy metal because they were tired of metal or something. That happened a couple of times in the '90s. It never worked out. They didn't come from the right place, I don't think. It's more like 'Let's do this now because it feels right now.' That's not how I am as a person. When I get stuck on something, I'm really stuck on it."

"Dominion" is due August 16 via Napalm Records. For the disc, HAMMERFALL re-teamed with James Michael to do vocals at Red Level Three studios, and Fredrik Nordström of Studio Fredman at Castle Black Studios for the instruments on the 12-song collection.