HELLYEAH has announced the "Perseverance" tour of the U.S. with ALL THAT REMAINS, BUTCHER BABIES, SAUL and DEEPFALL. These headline shows will lead the band to the radio festivals they are set to play all around the U.S. this spring. Tickets will go on sale, Friday, February 21 at 10 a.m. local time.

SiriusXM's Octane has started playing the track "Oh My God" from "Welcome Home" in honor of the band's perseverance. Kyle Sanders explained the urge to hit the road and promote "Oh My God": "While Vinnie Paul is obviously irreplaceable, one thing we can't not do is tour. As easy as it would be to say we're not going on the road, we have to. Vinnie would be extremely disappointed in us if we didn't promote this record properly."

Added Phil Labonte of ALL THAT REMAINS: "We are hitting it HARD this spring and we're excited it's with HELLYEAH, BB and SAUL. We'll be on the road in the U.S. most of the spring so make sure you get tickets now cause these shows are not to be missed!"

BUTCHER BABIES said: "After a year of writing, BUTCHER BABIES are excited to return to the stages across America. To tour with HELLYEAH and ALL THAT REMAINS seems like a natural progression for the band as we've been friends for years. We're elated to finally hit the road with these powerhouses. With an onslaught of new music and our explosive live show, we're more than ready for a triumphant return!"

ALL THAT REMAINS's latest album, "Victim Of The New Disease", was released in November 2018 via Fearless in North America and Eleven Seven in Europe.

ALL THAT REMAINS suffered a tragic and incredibly painful loss ahead of "Victim Of The New Disease"'s release when their highly respected and immeasurably talented lead guitarist and founding member Oli Herbert, who played on all nine albums in the band's discography, unexpectedly passed away. Guitarist Jason Richardson has since joined the band.

Last fall, ALL THAT REMAINS completed the North American "Disease Of The Anima" tour with co-headliner LACUNA COIL.

BUTCHER BABIES singer Carla Harvey recently told "Scandalous Podcast" that the band is "about to announce a lot of stuff" for 2020 after spending most of last year in the studio working on the follow-up to "Lilith", which was released in October 2017 via Century Media.

Last July, BUTCHER BABIES co-vocalist Heidi Shepherd told "The Robbcast Podcast" that the band was searching for a new label home following a split with Century Media, which released all three of the group's albums so far. 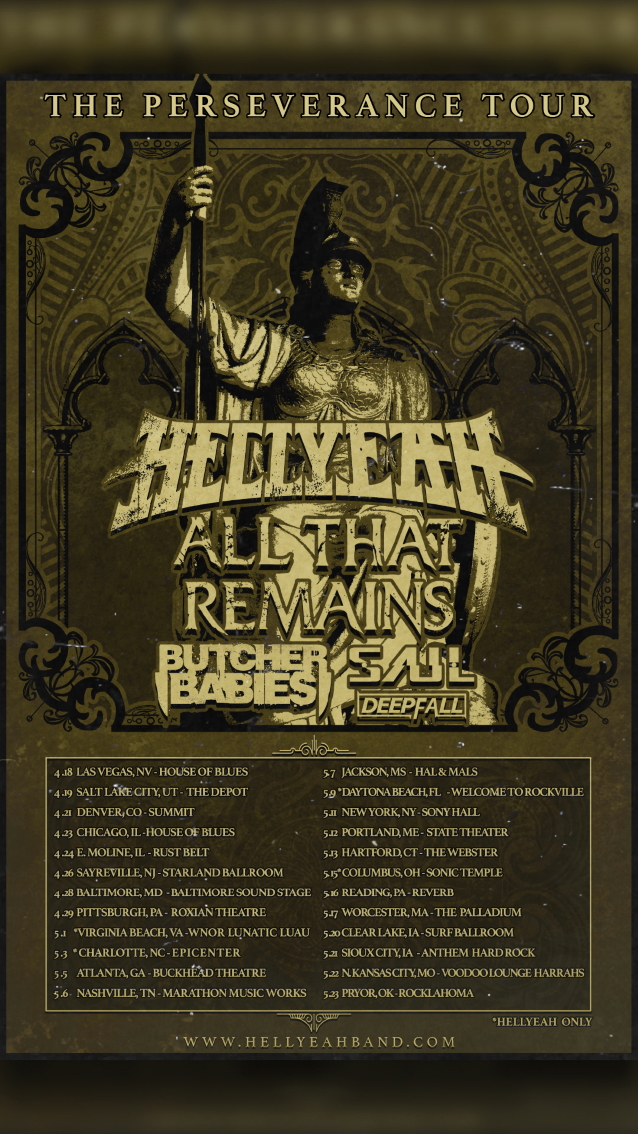