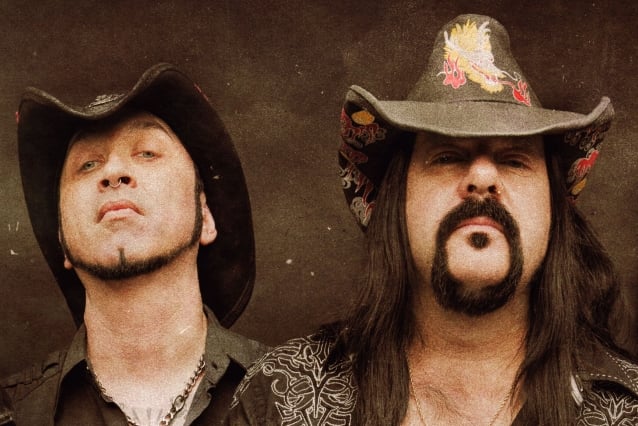 In a new interview with FM99 WNOR, HELLYEAH guitarist Tom Maxwell said that it was extremely difficult for him and his bandmates to complete the group's latest album, "Welcome Home", following the passing of their drummer, Vinnie Paul Abbott. "It was tough," he said (see video below). "We literally had to suck it up and get in there and just play for him and play for each other and play for the record and play for the fans. They were gonna wanna hear this. We were obligated — it was unwritten. It was something we had to do. And it was tough."

He continued: "We're still devastated about it. It's not something that we can ever recover from, I don't think. I think about the future, and, to be honest with you, I don't know how we are gonna be able to do it. And I'm not trying to take any kind of credit here, but he was my partner writing. Everything that I did bounced off of him, and then he bounced back off to me. And it's just on a musical level either; it's more of an emotional level. My love affair for trying to continue without him has been crippled. It's like losing your wife or your husband or someone who is irreplaceable. It's, like, how do you do that? I mean, people do — people go on, and they do, but usually they find light at the end of the tunnel through another door. Like with Vince — it was hard for Vince to continue without his brother [late PANTERA guitarist 'Dimebag' Darrell Abbott], but he found light at the end of our door. So we're kind of faced with that."

"Welcome Home" was released last September via Eleven Seven Music. The disc marked HELLYEAH's final effort with Abbott (formerly of PANTERA), who passed away more than two years ago.