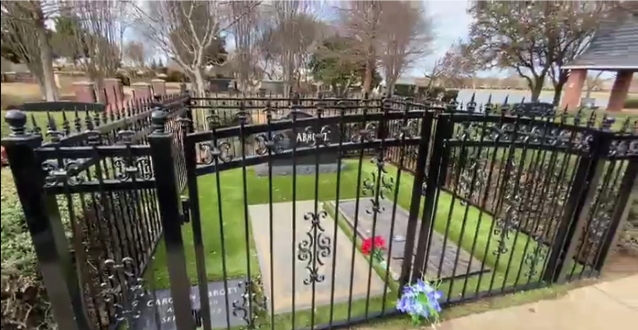 Recently uploaded fan photos of the graves of legendary PANTERA guitarist "Dimebag" Darrell Abbott and his brother, PANTERA drummer Vinnie Paul Abbott can be found below.

Last year, a protective fence was erected around the Abbott brothers' graves at the Moore Memorial Gardens Cemetery in Arlington, Texas, presumably to guard them from vandalism.

Vinnie Paul's grave marker at Moore Memorial Gardens was officially installed in May 2019. That same day, two pictures of the gravesite were released via PANTERA's social media, along with the message: "We ask that you please be respectful when visiting the brothers' graves."

Dimebag and Vinnie Paul formed PANTERA in the early eighties in Texas. The band recorded four independent albums before their 1990 major label debut, "Cowboys From Hell", introduced a heavier sound and made them a favorite with metal fans. 1994's "Far Beyond Driven" debuted at No. 1 on the Billboard 200 without benefit of a commercial hit single.

The group splintered in 2002 following the departure of volatile lead singer Philip Anselmo. Dime and Vinnie, as they were known to their fans, regrouped with DAMAGEPLAN, releasing the band's debut album, "New Found Power", in February of 2004. The group was touring in support of the record at the time of Dimebag's murder.

Posted by Markbag - The Last of the lastes Warriors on Monday, March 1, 2021

In in Arlington Texas. My bro brought me to see Dimebag and Vinnie Paul's grave I can't describe the feelings I have...