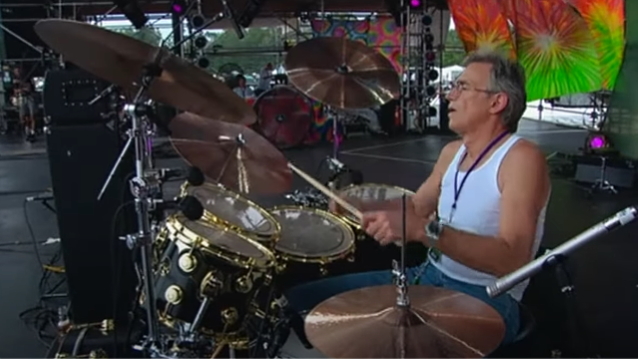 According to TMZ, longtime IRON BUTTERFLY drummer Ron Bushy has died at the age of 79. The only member of IRON BUTTERFLY to appear on all six of the band's albums, he passed away this morning at UCLA Medical Center in Los Angeles after a battle with esophageal cancer.

"Ron Bushy, our beloved legendary drummer of IRON BUTTERFLY, has passed away peacefully, with his wife Nancy by his side, at 12:05am on August 29th at UCLA Santa Monica Hospital," the band said in a statement. "All three of his daughters were also with him. He was a real fighter … He will be deeply missed!"

IRON BUTTERFLY is the American psychedelic rock band best known for the 1968 hit "In-A-Gadda-Da-Vida", which features a punishing heavy drum solo from Bushy at its core.

In July of 1968, IRON BUTTERFLY released its debut LP, "Heavy", and went on the road with the likes of THE DOORS, CREAM and THE WHO, while the album stayed on the Billboard chart for nearly a year. Their second release in July 1968 was the monumental "In-A-Gadda-Da-Vida". The 17-minute title track helped the album sell more than 30 million copies, and a three-minute version of the song became a Top 40 hit.

Back in 2012, guitarist Larry "Rhino" Reinhardt, who was in IRON BUTTERFLY during the 1970s and 1980s, died. Later that year, Lee Dorman, who played bass on their seminal records, also passed away.

Bushy is survived by his wife, Nancy, their three daughters and six grandchildren.

"In-A-Gadda-Da-Vida" was famously covered by SLAYER on the "Less Than Zero" soundtrack.