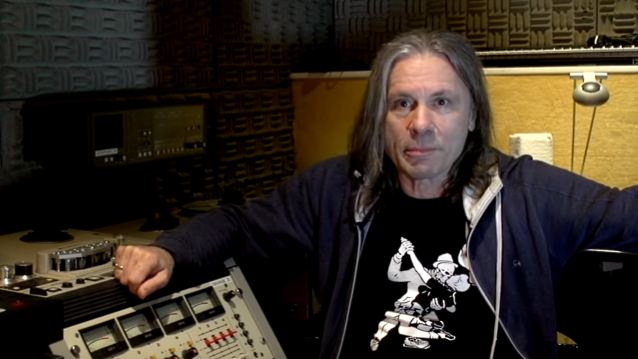 IRON MAIDEN singer Bruce Dickinson, who tested positive for COVID-19 last month after being fully vaccinated, discussed his battle with the disease in a new interview with SiriusXM's "Trunk Nation Virtual Invasion".

"I had my double shot of vaccine back in May, and everything [was] hunky-dory, and then I got what people are calling a breakthrough COVID infection, which was just like a… It's a bit more than a flu," he said (as transcribed by BLABBERMOUTH.NET). "I would really caution against people who go, 'Oh, it's just a flu.' No, it's not. And I know a lot of people who were not vaccinated — not because they didn't want to be, but they were too young to get it initially. You know, 22-, 23-, 24-year-old people who have not been able to get out of bed for six to eight weeks after it — they've been really sick, ongoing. They're not in hospital, but their life is really screwed up. And there's all kinds of… People are talking about long-term COVID causing diabetes, causing stuff with your brain, even — dare I say it — erectile dysfunction. There you go. They didn't tell you about that when they said go and get vaccinated. There's a really good reason to go [and get the vaccine] 'cause [COVID] makes your willy shrivel. Because the blood vessels with COVID can become really inflamed, so they get blocked up and your extremities don't get enough blood, and, obviously, there's one extremity which is dear to our heart as men, and if that doesn't get enough blood, then, boy, you're in for a world of pain — or not.

"So there's a lot of reasons, for me, why [getting] the vaccine [is the right thing to do]," he continued. "Again, anecdotal. People say, 'Oh, yeah, but you still got COVID.' I said, 'Yeah, but I'm not in hospital.' I got over it in 10 days. It took me about a week after that to get my smell back, to start feeling more normal — get energy and stuff. But this is not just an ordinary commoner garden flu.

"Honestly, it's my personal opinion — I'm not forcing anybody to go and do stuff — but I would advise anybody to just go ahead and get the vaccine."

Dickinson previously told Rolling Stone magazine that he doesn't personally believe that fans attending concerts should be required to get vaccinated, calling it "a personal choice," However, he said that he hopes everyone will get the shot. "Personally, I think people are just very badly advised if they don't go and get themselves double jabbed as quickly as possible, not for the reasons of going into concerts, but for their own health," he said. "Having said that, even if you've had a double jab, you can still get COVID, and therefore you can spread it to other people who might not have been vaccinated and they might get very sick and die. Now you cannot legislate against mortality. There are many things in this world that kill people and they're not illegal but are unfortunate. Cancer kills a lot of people. Heart attacks kill a lot of people. Obesity kills a lot of people. Malaria kills a shitload of people every year… So at some point, we have to just go, 'We're probably going to have to live with this. And if we're going to live with it, then you have your vaccination.'"

IRON MAIDEN's new album, "Senjutsu", was released on September 3 via BMG. It was recorded in Paris with longstanding producer Kevin Shirley and co-produced by bassist Steve Harris. The video for the LP's first single, "The Writing On The Wall", was made by BlinkInk based on a concept by Dickinson with two former Pixar executives. It followed a month-long teaser campaign and global "treasure hunt" for clues about the track title and concept.