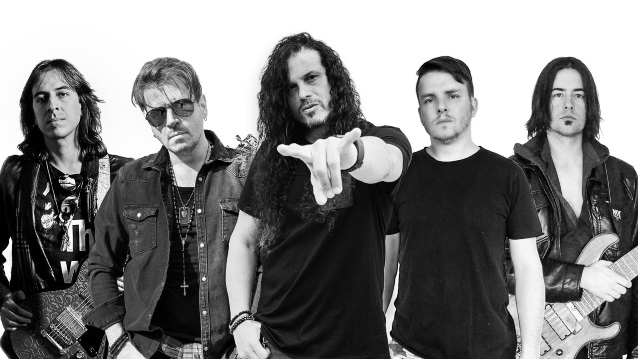 SOTO — the metallic hard rock group led by namesake vocalist Jeff Scott Soto (SONS OF APOLLO, W.E.T.) — has released a new single, "Detonate". The song features and was co-written by the group's late bassist, David "Dave Z" Zablidowsky, who was killed in a roadside accident while touring with ADRENALINE MOB exactly one year ago today.

A lyric video for "Detonate" can be seen below.

Said Jeff: "Today marks the one-year anniversary for probably the most horrible day of my life when SOTO bassist and one of my absolute brothers' life was taken from us so abruptly… David Z's passing not only shocked all of us close to him, but the rest of the world mourned with us as reality set in that we would never see this incredible human being again!

"The biggest compliment and tribute I and the band can pay to him is dropping a new SOTO track which David co-wrote with our own Edu Cominato in the back lounge of our tour bus while we traipsed around Europe on tour last spring. His tracks on the demo were recorded so well we decided to lift his parts, finish the entire song around him and let you hear the final mark of his work that will also appear on the upcoming SOTO album we are currently writing.

"The song is 'Detonate', which I wrote the lyrics about my own brother who was in a coma at that time… the words reflect someone in a lifeless shell/body still functioning enough to know they want to detonate, explode out of that body and come back to life.

"With cooperation from the Z family, proceeds from the song once it is released for sale will all go to the David Z Foundation. Here are the details for those who would like to make their own contributions to this incredible person and cause.

"We chose this day to honor our brother because we knew he would get all the recognition for it that he deserves.

"Today we praise you, brother Dave. You are immensely missed, thought of every day and now immortalized in song with us!"

SOTO was formed in 2014 when Jeff Scott Soto realized how much he missed the "heavier side" of his career after fronting artists like Yngwie Malmsteen, TALISMAN and JOURNEY, and even his own solo albums.

Zablidowsky — who also performed with groups including ZO2, TRANS-SIBERIAN ORCHESTRA and JOAN JETT AND THE BLACKHEARTS — initially joined Soto's solo touring band in 2013 and appears on both SOTO albums released to date, "Inside The Vertigo" (2015) and "Divak" (2016).

In July of 2017, Zablidowsky was touring the United States with ADRENALINE MOB — a group he had joined just months prior — when the band's tour RV, which had pulled off the freeway due to a flat tire, was struck by a tractor-trailer. The accident caused the deaths of both Zablidowsky, 38, and tour manager Jane Train, and resulted in serious injuries by band members Russell Allen, Mike Orlando and Jordan Cannata.

Earlier this year, SOTO — which also includes Jorge Salan (guitar), Edu Cominato (drums) and BJ (keys/guitar) — announced the addition of new bassist Tony Dickinson (TSO), who is slated to appear on the group's third album, due in 2019.

"It was the one and only natural choice for us after losing our brother David in the horrific accident last year," Soto said at the time. "[Tony] is phenomenally talented, and a great friend. He will fit right in with us, and I cannot wait for more of his contributions as we move the band forward!"