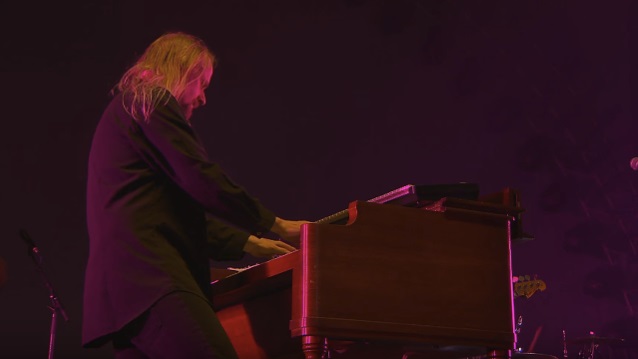 Luxi Lahtinen of The Metal Crypt recently conducted an interview with RAINBOW and STRATOVARIUS keyboardist Jens Johansson. A couple of excerpts from the chat follow below.

The Metal Crypt: I assume it feels great to be on tour with RAINBOW, right?

Jens: "It's a very good feeling and it is really nice to be involved in the tour. It's material I love and that I have been familiar with since I was small. On top of that, Ritchie [Blackmore] doesn't seem to like typical tour life, so he has arranged super-comfortable travel. This means lots of space between the gigs, very relaxed travel schedules, etc."

The Metal Crypt: "Memories In Rock" 2018 is the kind of tour that may RAINBOW fans, both old and new, have been waiting for years and now it's really happening. What are your thoughts and feelings about touring under the RAINBOW name? Do you consider it a great honor to be a part of it all?

Jens: "I am, like you say, very honored to be a part of this. Like everyone, I had heard the rumors for many years but didn't really think it could happen. I was extremely happy when they contacted me and, of course, very curious about who the rest of the band would be, especially the singer."

The Metal Crypt: You have played one show in the Czech Republic, one show in Germany, two in Russia and one in Finland; have they all sold out and has the response been overwhelming? How would you summarize these events in your own words? You have obviously given some memorable moments to your fans but what have the fans given back to you?

Jens: "The shows this year have all been sold out or close to it, I believe. Yes, there have been a lot of really memorable moments on stage. If nothing else, I can see the listeners have waited a long time for this, never thinking it could ever happen. There is now a trajectory since the first gigs with this lineup. There is some development; we are getting to know each other better musically, and the songs are a developing in different directions. But still few enough gigs that — I hope — nobody is getting sick of anyone else."

The Metal Crypt: This year also marks the 40th anniversary of one of RAINBOW's most important albums, "Long Live Rock 'N' Roll". What meaning has this album had for you as a musician?

Jens: "All of the RAINBOW and [DEEP] PURPLE albums have been huge milestones in my life, and pretty much most of the people I have played with as well, who were any good anyway. 'Long Live Rock 'N' Roll' is a fantastic album and we all sucked up anything from that camp like sponges, really. This stuff was our lifeblood. Yngwie [Malmsteen] used to joke that he would play 'Made In Japan' on the record player until it was so worn out that it was just a thin vinyl spiral, then he'd have to go buy another copy. Only I'm not 100 percent sure he was joking... Maybe he was about the spiral part."

Read the entire interview at The Metal Crypt.