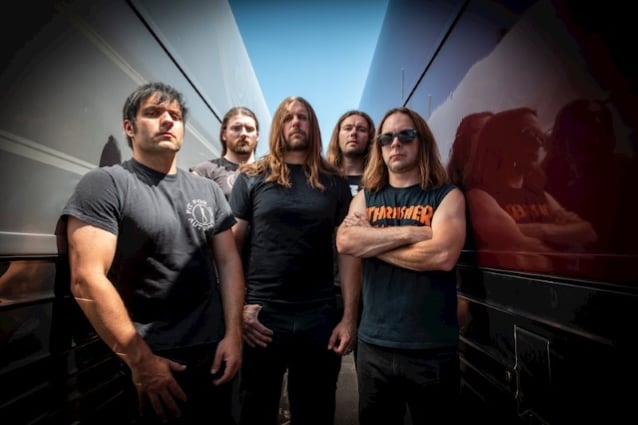 The metalcore boom of the early-to-mid-2000s signaled a changing of the guard in metal that pushed out nu-metal and introduced an era of Gothenburg melodic death metal-inspired riffing and hardcore "breakdowns." Ground zero for the scene was Massachusetts, with the likes of KILLSWITCH ENGAGE, SHADOWS FALL and UNEARTH each generating significant airtime on the rebooted "Headbanger's Ball" on MTV2 as well as prime summer festival touring extravaganzas like Ozzfest. However, as with most styles that become popular, a flood of second-rate imitators and oversaturation would water down the scene, and, by the end of the decade, metalcore was now considered outdated in favor of another brand of "core," deathcore.

In a recent interview with Finland's Kaaos TV, UNEARTH guitarist Ken Susi delved into the origins of Massachusetts metalcore and why UNEARTH has refused to abandon the style they helped popularize.

"Bands like KILLSWITCH ENGAGE were neighbors of ours but they didn't start becoming a band until the early 2000s," he said (see video below). "We were a band in 1998, but we were friends with them. There was a lot of really good talent around that area, and I mention KILLSWITCH ENGAGE especially — they lived on the west side of Massachusetts and we lived on the east, so we always played shows together. There were a lot of straight-edge bands like EARTH CRISIS and those kinds of bands, and that's when the Deathwish and Hydrahead [record label] stuff was really happening. To be honest with you, there were bands like CAVE IN that were really cool, but UNEARTH, basically, we pulled our inspiration because we would play with bands like SHADOWS FALL, which was a very metal band, then on the same weekend, we'd play with a band like HATEBREED, so we needed our setlist to be heavy and also melodic. Buzz [McGrath, guitar] and I really were big fans of IRON MAIDEN and we were really big fans of New York hardcore and stuff like that, and we were definitely into shred guitar players like Paul Gilbert and Yngwie Malmsteen so we kind of fused all three of those together and made our own sound. I think if you look back at the 2000s and early 1998 when we put out our demo, I think we don't really sound like anybody else. We did our own things. We were doing sweep arpeggios over breakdowns. I don't think too many people were doing that, if anybody."

Conversation then shifted to the inactive status of SHADOWS FALL, who was one of the few New Wave Of American Heavy Metal bands to sign a major label contract, as well as why UNEARTH has stuck to its core sound when so many of their peers have either broken up or abandoned it altogether.

"When the fans stop coming to shows, that's when bands decide to give it up," he said. "I'm not saying it's just them [SHADOWS FALL]. Metalcore in general, there's a huge surge for that, and then there's a million bands copying all the forefathers and some of them got big and remained big. Some of them claim to be metalcore for a while and now they're different. We've stuck to our roots. We're one of the only bands that have, and there's other bands who have been copying our sound for years who may be bigger. It's okay; it goes with the territory."