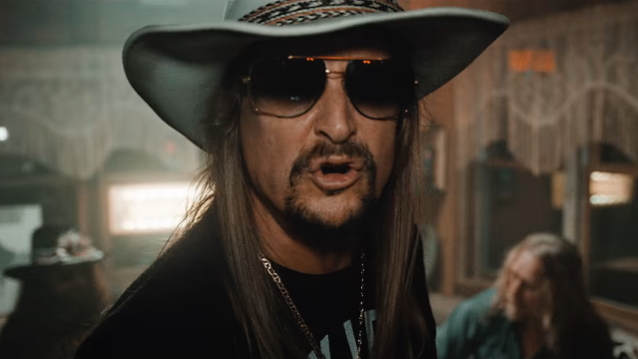 Kid Rock has released a defiant new single, "Don't Tell Me How To Live", in which he rants against "woke" culture and the mainstream media at a time when "every opinion has a millennial offended."

The first new music from the Michigan-bred rap-rocker since 2017, which was recorded with the Canadian hard rockers MONSTER TRUCK and plays off that band's 2015 song of the same title, was accompanied by an official music video which features Kid Rock wearing a shirt that says "social media sucks."

"I'm the last of a few still screaming 'Fuck you,'" he raps in the song.

This past January, Kid Rock revealed that the COVID-19 pandemic gave him plenty of time to write new music, saying, "I haven't this much time to work on music since my first record." According to the Detroit Free Press, he added that he had planned to release a 50-song triple-album this year, made up of 10 hip-hop tracks, 10 rock tracks, 10 country tracks and 20 previously unreleased cuts.

Kid Rock, an ardent supporter of former President Donald Trump, made headlines in 2017 when he announced he was considering a run for a U.S. Senate seat in Michigan.

Kid Rock was once a contestant on NBC's "Celebrity Apprentice", which starred Trump.

"Don't Tell Me How To Live" lyrics:

AIN'T NOBODY GONNA TELL ME HOW TO LIVE

AIN'T NOTHIN NEW RIGHT CHURCH WRONG PEW
GET A CLUE, A CREW, YOUR FAKE NEWS AND VIEWS
CAN ALL GET THE BOTTOM OF MY MOTHERFUCKIN' SHOE
I'M THE LAST OF A FEW STILL SCREAMIN' FUCK YOU