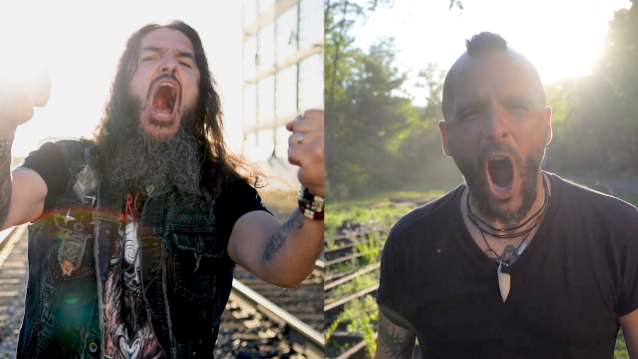 As part of HardDrive Radio's latest "Roundtable", MACHINE HEAD's Robb Flynn and KILLSWITCH ENGAGE's Jesse Leach joined Lou Brutus to talk about what they've been up to during quarantine and their thoughts on the current state of politics in the U.S., as well as their collaboration on MACHINE HEAD's latest single, "Stop The Bleeding". The protest anthem was written days after back-to-back deaths of George Floyd and Ahmaud Arbery.

Speaking about the weeks-long civil unrest that resulted in Jesse and Robb's collaboration, Flynn said: "This is a powerful time in history. It's not gonna be the same after this. This is a moment of change. We're going on five weeks of protests here. This stuff usually dies down after five days. We're on the fifth week of worldwide, nationwide protests. And I just felt that everything that needed to be said, and then just Jesse coming back with the vocals that he did was just amazing — it just added this whole incredible layer to the song. And I was, like, 'We've gotta film a video for this and put this out right now. We don't need to worry about setting it up for this or getting the press ready or whatever. This is about the streets; the streets needs to hear this right now.'"

Adding Jesse: "[It was important] having us represent the metal community. And not everyone may agree with it for whatever reason, 'cause there's always discussion about it. But to me, it was, like, 'Where's the voice coming from the metal community? There's no one speaking out about it. This is a really fucked up thing that happened.' And it was just all quiet. So when I saw Robb, I was, like, 'Yo, this is what we need to do' — hopefully spark people to start discussing it, 'cause it was just crickets."

Asked why he thinks the metal community was so quiet after the Floyd killing, Jesse said: "My personal opinion is there's a weird sort of split with people where the moment you start to criticize the police or you criticize something that someone firmly believes in, a.k.a. Trump. Some people, when you start to criticize Trump, they get on this crazy tirade, this crazy defensiveness that is ingrained in them, I believe, from whether the way they were raised or what they're reading in the media.

"My whole take on it is this: I'm not left; I'm not right," he continued. "I don't care about that stuff. I care about what's right and what's wrong. And to me, what I'm seeing is happening is wrong. I don't care how you wanna paint it. You wanna talk about, 'Well, white people are being killed too.' Black people are saying, 'Leave that alone.' Right now, we need to give black people [an opportunity] to speak. 'Cause it's not just this one thing. We're talking about decades, we're talking about centuries of oppression. This is a huge, large, deep issue, and this just sparked it off. I mean, look, the rioting, the protesting is still happening. This is a deep-rooted wound that needs to be addressed. And if it's not gonna be addressed and people are gonna continue to try and silence it and change the subject, you're gonna make it worse — you're just gonna make it worse. And we need to figure out a common ground to stand on to discuss these things and hopefully create some kind of a change that can help with this situation. It's not just gonna go away."

"There's this weird thing now — people make these identities out of a political belief, this fucking team mentality that drives me up the freakin' wall. Everybody's gotta be on a team now — it's Team Trump or it's team this or Team Hillary. It's, like, no, man.

"My manager is a total Trumper — voted for Trump, got his 'MAGA' hat and everything," Robb added. "And we'll sit there and debate it, and we'll debate things. And it's crazy. You think because he's, like, 'I love Trump and I wear a 'MAGA' hat,' but then you start talking about, 'Would you hire a gay person?' 'Of course I'd hire a gay person.' 'Okay, would you be okay with somebody having an abortion?' 'Of course I'd be okay with somebody…' But wait, that's not what…

"People get these weird identities built around them, and especially with social media, it's amplified, because they can reinvent themselves as these things."

The "Stop The Bleeding" performance video was directed and edited by Mike Sloat, shot on location on the streets of Oakland, California, with Jesse's part filmed in Kingston, New York with David Brodsky.

MACHINE HEAD is donating a significant portion of the streaming proceeds from "Stop The Bleeding" to Grassroots Law Project, the organization representing George Floyd, Breonna Taylor and Ahmaud Arbery.

"Stop The Bleeding" and B-side "Bulletproof" were produced by Flynn and engineered by Zack Ohren at Sharkbite Studios in Oakland, California, with the mix being handled by longtime MACHINE HEAD collaborator and producer extraordinaire Colin Richardson, together with Chris Clancy at Audioworks Productions UK. The tracks were mastered by Ted Jensen at Sterling Sound.