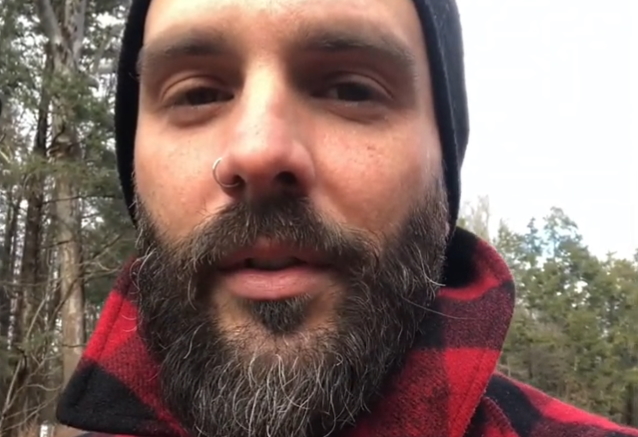 KILLSWITCH ENGAGE singer Jesse Leach has posted a new eight-minute video containing some of his thoughts from a walk near his home in the Catskills, the vast expanse of the Appalachian Mountains situated in southeast New York state.

Speaking about how the COVID-19 pandemic and subsequent government reactions to it have affected our mental health, Leach said: "I know it's hard with the masks and social distancing and all these things that we're going through, but we're arguing way too much. There's way too much division about this virus, about the state of the world, about a vaccine, about control, and people can't have differences of opinion and have a discussion, it seems like. It seems like you either believe one thing, and you're on that side, or you believe [some other] thing, and you're on that side. For me personally, I'm in the middle — I have beliefs and thoughts on both sides of the spectrum here, and I'm questioning things, and I'm researching things, and I'm not swallowing what I'm told or what somebody tells me to think. And I think there's a lot of that going on — there's a lot of swallowing the information and regurgitating what you've been told without the research. Without common sense, too."

He continued: "Just think about some of the things that are going on. Checks and balances. The power of contemplation, thinking and discussion. Because some people have changed my mind on certain things, from having a respectful discussion. And I think that's also part of adaptation — being willing to change your point of view, change your mind, change your opinion and grow. There's way too much of this 'I think this and that's it, period,' 'You're either black and you're white' when there's a ton of gray. There are shades of gray on so many different levels with what's going on right now. So it's nuances, it's adaptation, it's survival, and it's staying positive — as hard as that is. And trust me — I have my days; I have my days where this is hard. It's really hard. But I'm pushing through, and I'm finding new ways."

While 346,000 Americans have died so far as a result of COVID-19, a number of people have come out against COVID-19 response measures, including lockdowns, physical distancing and mandatory mask policies, saying that they violate constitutional rights.

More than 77,000 people in the U.S. lost their lives in December to COVID-19, while 6.4 million contracted the virus. There are now more than 20 million confirmed COVID-19 cases in the U.S.

KILLSWITCH ENGAGE's latest album, "Atonement", was released in August 2019 via Metal Blade Records in the U.S. and Sony Music Entertainment in the rest of the world. The disc features guest appearances by the band's former lead singer Howard Jones and TESTAMENT frontman Chuck Billy. It marks the band's third full-length release since the return of Leach, who rejoined the group in 2012.