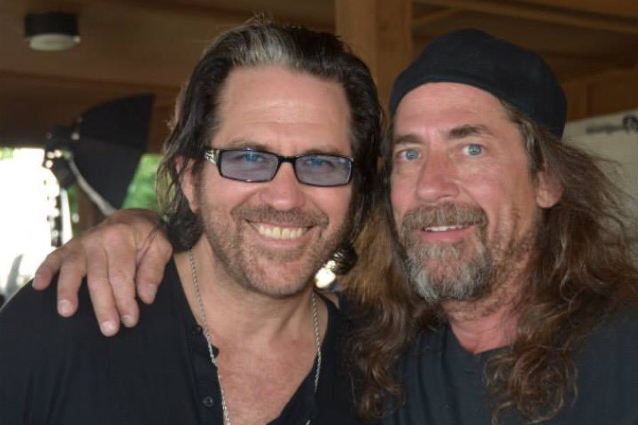 Nate Winger, brother of WINGER frontman Kip Winger, died earlier today. An official cause of death has not yet been revealed.

Kip announced his brother's passing in a social media post. He wrote: "It is with profound sadness that we say goodbye to my beautiful brother Nate.

"Nate, I learned so much from you in this life. You were a warrior's warrior. Your big heart was so beautiful. You will be missed and honored by so many. I love you. R.I.P."

Most recently based in Denver, Nate Winger has played drums in several projects, including LORDS OF DISTORTION and BLACKWOOD CREEK, which featured Kip on bass and vocals.

In his official bio on the LORDS OF DISTORTION web site, Nate wrote: "I grew up in a musical family. Mom and dad had a jazz trio with a piano player and my brothers and I would go on the road with them. Since there were tree of us, we started a band when we were really young. My older brother Paul played guitar and Kip, my younger brother who has had a bit of success in his time, played bass while I started my career on drums. We enlisted a neighborhood kid to be the second guitar and then we went and played gigs for keggers, parties, dances and everything in high school. I moved to L.A. in 1985 and found myself recording with major-label records, primarily doing background vocals. I had the opportunity to work with producers Beau Hill, Bob Ezrin and numerous others. I sang on records from KISS, Dweezil Zappa, EUROPE and RATT to many newly signed bands in L.A."

It is with profound sadness that we say goodbye to my beautiful brother Nate.

Nate, I learned so much from you in this life. You were a warrior’s warrior. Your big heart was so beautiful. You will be missed and honored by so many. I love you. R.I.P. pic.twitter.com/8QrDRYW8xK