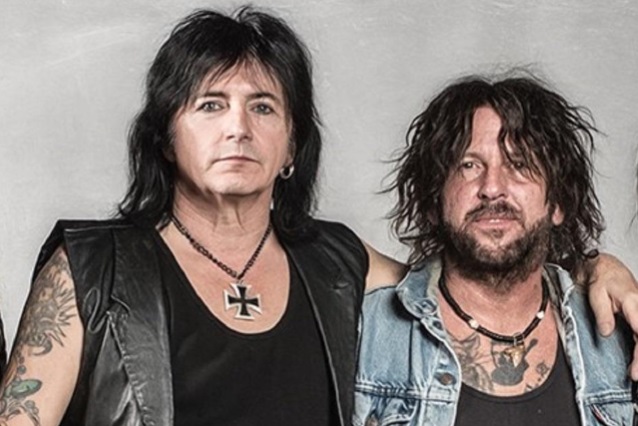 L.A. GUNS has announced the addition of guitarist Johnny Monaco (ENUFF Z'NUFF) to the group's ranks. He joins L.A. GUNS as the replacement for Michael Grant, who was fired from the band earlier in the month.

L.A. GUNS released a statement on March 7 saying that Grant was leaving the group "to pursue other interests, including his solo project, MICHAEL GRANT & THE ASSASSINS." A short time later, L.A. GUNS guitarist Tracii Guns revealed in an Instagram post that he "wasn't involved in [Grant's] departure from the band." He added: "People come and go, and I'll miss him badly in the band."

According to Grant, he found out that he was being kicked out of L.A. GUNS via a phone call from the band's manager. "The only reason that I was given was, 'It's time. It's time,'" he said. 'And I was just, like, 'Okay.' I wasn't resistant. I didn't fight. I wasn't like a crying little girl. I was just, like, 'All right. If that's how you guys want it.' And then I proceeded to text the rest of the members in the band, like, 'Did you know anything about it?' And no one knew too much about it. Tracii said he had fought for me for about an hour."

Grant said that L.A. GUNS tried to appease him by making "it seem like I left just to make it seem like it was my decision and that things didn't get dragged in the mud." He added: "When you've invested five years in something and not even given the respect of, 'Hey, man…' If the real reason was to support MICHAEL GRANT & THE ASSASSINS, it should have been, like, 'Hey, man, giving you a call. You should go off on your own. We're gonna support you.' But it wasn't like that at all. I was fired for absolutely no reason. I was given zero reason, no courtesy call, nothing."

Tracii and Lewis reunited in 2016 under the L.A. GUNS banner and released arguably the most critically praised album of their catalog, "The Missing Peace".

L.A. GUNS released a new CD, DVD and Blu-ray, "Made In Milan", on March 23 via Frontiers Music Srl.