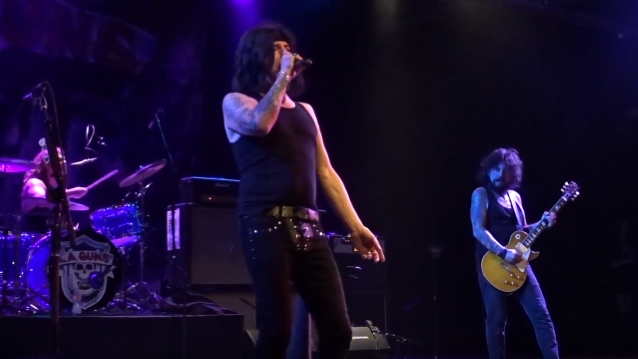 Fan-filmed video footage of L.A. GUNS performing a new song called "The Devil You Know" on November 29 at Warehouse Live in Houston, Texas can be seen below.

"The Devil You Know" is apparently the title track of L.A. GUNS' new album, which will be released in 2019 via Frontiers Music Srl.

Earlier this week, Guns revealed that the new L.A. GUNS album was completed, describing it as "pissed off," "nasty" and "pure L.A. GUNS." Those comments echoed what Lewis recently told Midlands Metalheads Radio, to whom he described the new album as "like [BLACK] SABBATH, but blacker."

When "The Missing Peace" was released in October 2017, it added a new and unexpected chapter to the long and often confusing history of L.A. GUNS, who, along with W.A.S.P., are the longest-running, continuously active group of the 1980s Sunset Strip scene.

Since being founded by guitarist Guns and drummer Rob Gardner in 1983, more than 50 musicians have performed under the L.A. GUNS moniker, including Axl Rose (who fronted the group prior to forming HOLLYWOOD ROSE, and then again for a brief period after that band's breakup), Ralph Saenz (better known as Michael Starr of STEEL PANTHER), Jizzy Pearl (LOVE/HATE, QUIET RIOT), Chuck Garric (ALICE COOPER), Chris Holmes (W.A.S.P.) and Keri Kelli (NIGHT RANGER, RATT).

When Riley left the band in 1992, it began a rotating door lineup that continues in full force in 2018, a year in which four guitarists have performed alongside Guns. The group's current lineup officially features Guns, Lewis, drummer Shane Fitzgibbon, bassist Johnny Martin and bassist-turned-guitarist Adam Hamilton, who played with the band from 2001 to 2007 and rejoined earlier this year after the departure of Johnny Monaco (ENUFF Z'NUFF). Because Hamilton is unable to tour extensively, however, the group recently announced that FASTER PUSSYCAT guitarist Ace Von Johnson will join them on longer tours.

For a number of years after Guns left the band in 2002 to focus on BRIDES OF DESTRUCTION — a group that also featured MÖTLEY CRÜE bassist Nikki Sixx — there were two competing versions of L.A. GUNS: one featuring Lewis and Riley, and another featuring Guns. After the latter incarnation disbanded in 2012, Guns and Lewis gradually began making amends, performing a full set of L.A. GUNS material together at a Las Vegas concert in 2015 before officially joining forces (while initially being billed as L.A. GUNS' PHIL LEWIS & TRACII GUNS) for a handful of concerts the following year. For the past two years, the group has toured and recorded simply as L.A. GUNS.

In 2019, however, there will once again be competing incarnations of L.A. GUNS, as Riley — who was in the group for a total of 27 years and is said to own 50 percent of the band's name — will perform at the M3 Rock Festival in Columbia, Maryland in May under the L.A. GUNS moniker with a lineup that will include Nickels, guitarist Scott Griffin (who played bass for the band from 2007 until 2009, and then again from 2011 to 2014) and vocalist Jacob Bunton (ADLER, LYNAM).

Since the M3 performance was announced, Guns and Riley have traded barbs on social media. "Some guys would rather headline a sports bar than play on a great bill like M3," Riley wrote on December 6. "L.A. GUNS is back to being a fantastic band and Steve Riley is still a drummer," Guns responded. He subsequently added, "What would you have done without my name [for] the last 15 years, you ungrateful punk?" 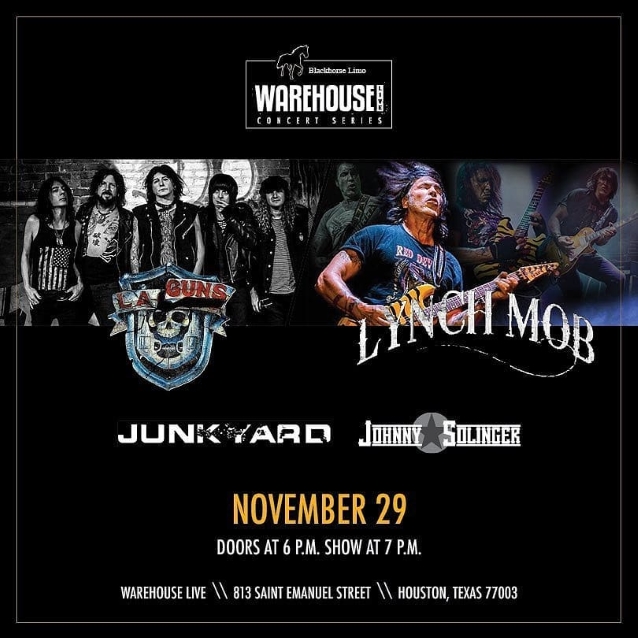