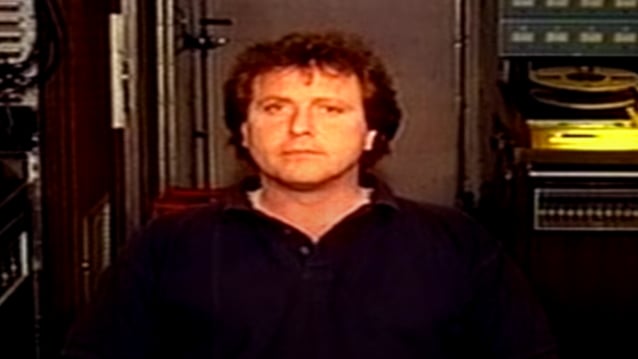 "Martin was a huge part of my life...helping me from the first time we met through until Slide It In...

Birch began his career in music as an audio engineer with Jeff Beck, FLEETWOOD MAC and DEEP PURPLE. In 1981, he kicked off a long tenure working with IRON MAIDEN, producing their first nine albums, from "Iron Maiden" to "Fear Of The Dark". He also produced and engineered LPs for various DEEP PURPLE-related projects (RAINBOW, PAICE ASHTON LORD, WHITESNAKE, Roger Glover, Jon Lord). The song "Hard Lovin' Man" from the DEEP PURPLE album "Deep Purple In Rock" is dedicated to him. He retired in 1992, after producing MAIDEN's "Fear Of The Dark" album.

In a 1983 interview with France's Best magazine, Birch stated about MAIDEN: "At first, I could objectively judge them and I think that they are very different from the hard rockers of the early seventies. Nowadays, I'm not so sure I can judge them, as we have become very close friends and I can't do that anymore.

"The first time I saw them at work, I was surprised and seduced by their energy and their attitude. I have rarely seen bands with so much energy. In this way, they reminded me a bit of the early PURPLE. But their attitude towards rock is very different, and so is their conception of it. It was said that they were a second DEEP PURPLE, but I don't agree with this. Obviously, Steve Harris was a PURPLE fan, but he's mostly influenced by bands like JETHRO TULL, UFO or even GENESIS. Nothing to do with DEEP PURPLE. Of course, in both cases we have a very melodic hard rock, and not just speeded up noise like with some other bands in heavy metal, but I don't think we can compare any further."

He continued: "I personally wanted to produce them because it was a way out of the PURPLE family. There are in fact many differences. Musically, a band like IRON MAIDEN is typical of the second generation of hard rock and stands out from the first one because the band is more consistant, more compact. They don't fall into easy and very boring solutions with 20-minute guitar solos, then keyboards, then drums, like I experienced with DEEP PURPLE. I think they're more robust, musically speaking. Another difference is their attitude towards the outside world. They are not into the 'star-system' and remain very accessible. Success has raised any barriers between them and the others, press, audience, which wasn't the case before. Moreover, they listen to you, and they are not convinced right away that they are right. This is why I think that this is my favourite band to work with; the producer/band relationship is much more constructive. Even within the band, although Steve Harris is the boss because he founded it and writes most of the songs, there is a great unity and nobody tries to stand out individually from the team. It's really nice, and mostly really exciting because their music is full of energy."

It is with a very heavy heart I’ve just had verified my very dear friend & producer Martin Birch has passed away...Martin was a huge part of my life...helping me from the first time we met through until Slide It In...Mt thoughts & prayers to his family, friends & fans...?? pic.twitter.com/J4UyDiG9zR

So shocked to hear the sad news of Martin Birch’s passing.


Martin was a lovely guy and a great producer - he produced Heaven and Hell and The Mob Rules for Sabbath. He will be deeply missed and my thoughts go out to his family. R.I.P.

What a loss. RIP Martin Birch.
To say he was my biggest influence as a record producer would be an understatement. pic.twitter.com/JseecxUhTd

Really sad to hear of the passing of Martin Birch. Brilliant producer. Had the pleasure of working with him on the Black Sabbath albums #HeavenandHell and #MobRules. Condolences to Vera and family. #RIPMartin pic.twitter.com/FPZajWRvpN


"My thoughts & prayers go out to his wife Vera & his daughter Haley. He was a genius producer & a very dear friend of Ronnie’s. May he RIP"- Wendy Dio pic.twitter.com/9GTqNs36WC

A true legend has passed! This man produces some of my favorite albums from Iron Maiden (Killers/Number of the Beast) to Black Sabbath (Heaven & Hell/The Mob Rules). His pronounced kick drum spikes on critical… https://t.co/fUL8gk9EoH

RIP #martinbirch , he produced the Sounds to Most of our lives #tones #producer @IronMaiden @BlackSabbath

A sad day for the Family of Rock. Martin Birch - the legendary Producer of Deep Purple and many other Great Artists - passed away on Sunday. Our hearts and prayers go out to his Family and Friends. RIP Martin Birch
- Scorpions pic.twitter.com/UFSrUh8zLE