LITA FORD, L.A. GUNS, JACKYL, BANG TANGO and FASTER PUSSYCAT have been confirmed for the Rock The Bayou music bash, featuring four days of music, food and family fun on the former grounds of Houston's AstroWorld theme park. The site is being transformed into a 100-acre festival playground for those who love to rock. More than 40 bands will play two stages over four days.

One of the most affordable summer music bashes in the country, Rock The Bayou offers a $99 single admission, early-bird ticket for all four days of the music festival. Active U.S. military (with ID) will be admitted for half-price.

For tickets and information, charge by phone at (713) 629-4747, or visit RockTheBayou.com or OnlineTickets.com — the festival's exclusive ticket seller.

Rock The Bayou intends to be one of the nation's largest and most accessible summer concert fests, says Ali Fazeli, president of The Fazeli Group, which is promoting and producing the event. Some 50,000 people a day are expected to attend. Festival wristbands will allow people to come and go as they wish.

"We've got an unbelievable lineup that celebrates rock's top legendary artists," Fazeli explains. "We've designed an event with a family flavor and the most affordable ticket price of the large summer music festivals."

Plus, $1 from every Rock The Bayou ticket purchased will go to the National Multiple Sclerosis Society, Lone Star Chapter, says Fazeli.

With climbing gas prices putting the chill on Labor Day getaways, Rock The Bayou offers Texans a close-to-home alternative. "Rock The Bayou gives them a unique 'stay-cation' option — a chance to celebrate the end of summer without breaking the bank," explains Fazeli.

For family fun, a Ferris wheel is being brought in, along with a towering drive-in like screen that will play movies after nightly band performances. A second stage will feature Texas bands for continuous music. Rock The Bayou will also offer a VIP area, parking, safe campgrounds and RV facilities.

For Fazeli, the long days and nights putting together a legendary rock lineup have been energizing. The self-professed workaholic is also a big music fan.

"We're thrilled to have such a great group of performers at one, huge festival for the first time in Houston," he says. "This kind of event has been long overdue for such a diverse and acclaimed city."

The festival billing is shaping up as follows: 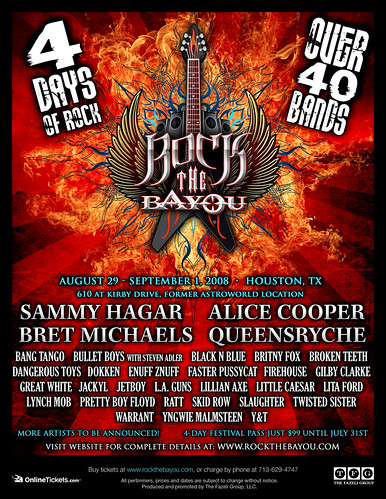